An Overhaul (part 7) - On the Road Again

After 30 months and about 12,000 mostly rough miles, my Black Mountain Cycles gravel bike is long overdue for an overhaul.  A frame off overhaul, if you will.  I removed, cleaned, and inspected each component, analyzing wear for possible replacement and performance for possible upgrade.

The big relief is that the big things, namely the frame, fork and wheels, look great and work great.  Very small touch up paint on the frame and fork and very minor truing on the wheels.  Nothing more required or desired.

Of course, the tires and sealant need replacing, as do the drivetrain components of the cassette, chain and chain rings.  I also replace all cables, housing, brake pads and bar tape.  "That's just normal wear and tear, dude."

That's it, this time.  Maybe I'll try a Salsa CowChipper handle bar in the future.  And maybe a different saddle.  Maybe.  This bike is built for long miles on rough roads in all conditions.  It handles that just fine.
Posted by CrossTrail at 3:41 PM No comments:

The End of Odin's Revenge - One Rider's Retrospective

For five years, Odin's Revenge threw down an annual 180 mile remote road bicycle race that captured the very essence of the storied Mid-Western gravel scene. Now, the downright neighborly folks behind this remarkable event are pulling up stakes and moving on. I appreciate all their efforts over those years and cherish those experiences. I know they care deeply for the event and all the people with whom they shared it. But I'm still sad. I cranked, pushed and dragged my bike almost sixty-eight hours of official race time to reach four finish lines. That leaves a mark. So, I'm not letting this pass without at least one retrospective from this grateful rider.

As a start, the beautiful, brutal, mysterious course is legendary. Miles of rolling primo gravel wind through remote backcountry, connected by stretches of deeply rutted, washed out, powdered dirt near-roads. Twisty-turvey ridgeline spins precipitously drop into deep, forested ravines before nasty  steeps claw back out. Miles pass, sometimes hours, without the sight of a single occupied building, let alone a town. You are immersed in the depths of an endless central Nebraska prairie.


Then the weather chips in. Mid-summer midwestern heat and humidity, whipped up by persistent, unbridled winds, extract every ounce of fluid from the body and dare you to think a positive thought.  But you do, because that's what you do and because anything less dooms the day.

If, by some Norse god treachery, those powdery near-roads turn to mud, forget about riding and maybe forget about some of your expensive bike parts. Listen to any survivor of the 2014 Odin's Revenge, the infamous Mud Year. Here's one story, just a flashing moment of my 21 hour day that year. On a particularly steep, rutted, muddy descent, I actually slid down sideways. Yes, my bike was perpendicular to my direction of travel as I feebly maneuvered between wheel-gobbling ruts. Only the bottom of the hill stopped me. That kept the heart rate up.


The conditions vary from hero gravel to ghastly, and you never know how long a particular elixir or witches brew of conditions will last. The DSG crew change the course every year and divulge it only by paper cue sheets at the start and at a half way checkpoint, if you somehow survive to make it that far and on time. The mystery and eventual discovery of the route are all part of the allure. What form of beauty or beast, or both, lies in wait around the next bend or over the next rise?

More amazing than the Odin's Revenge race course, however, are the friendly folks behind it. Chad and Merrie Quigley, Matt Bergen, Bob Wieck, Garrett Olson, Kyle Vincent, Nate Bell and Paul Siebert. They envisioned, created and nurtured a unique, home-spun event for everyone to enjoy. They cater to the adventuresome spirit, with a focused guidance for everyone to share the experience with each other and to take care of each other, all in the context of an unsupported, remote road bicycle race. To put all that together, and keep it together, is a remarkable achievement.


People responded. They sure did, from all corners of the cycling world, from the fastest to the slowest, the expert to the novice. They ventured to a speck on the map of flyover country for Odin's Revenge. This eclectic assortment of certifiable bike geeks breathed life into the communal experience envisioned by the DSG crew. Together, everyone at Odin's Revenge demonstrated that a bike race can be more. So much more.


﻿
The vibe generated at Odin's Revenge reverberated throughout the gravel scene and through all those who were privileged to participate.

The Black Mountain gravel bike overhaul moves to the handlebars, stem, saddle, seat post and collar.  To the non-cyclist, these components may seem to be, well, rather pedestrian.  To the cyclist, however, one errant component in this mix can turn a nice, long ride into something entirely different.  Here's a look at some under appreciated components after 12,000 miles. 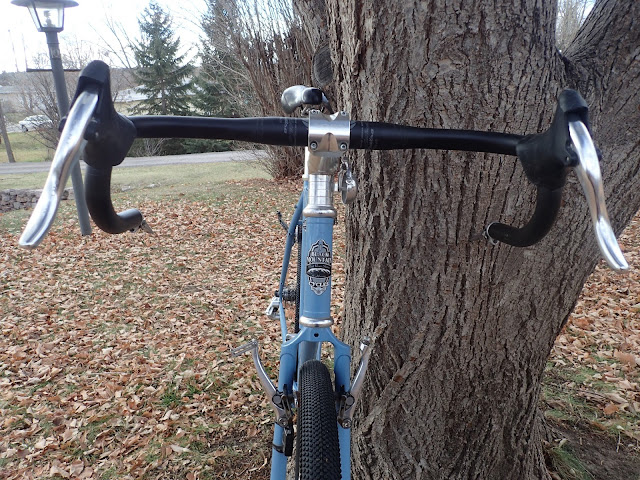 Handlebars (Salsa Cowbell 44 cm).   Over more than a few miles and seasons of road riding, I have tried many different handlebars in an endless search of long distance comfort on the hoods, functional control in the drops, and usable recovery space on the tops.  Longer distance, rough road riding is tough enough on the hands and I have an additional challenge of a problematic left wrist, first broken and not properly healed back in 1974.  No handlebar worked just right.

No handlebar, that is, until the Salsa CowBell I installed on this Black Mountain gravel bike.  The slight flare, shallow drop and short reach combine to make this an exceptionally comfortable road bike bar for me.  Although the flare is reminiscent of the old Salsa Bell Lap cyclocross bar and many varieties of road bars offer a shallow drop or a short reach, the CowBell put it all together in a way that works just right for me.

A careful inspection of the CowBell bars reveals no cracks or flaws, or other reason to retire them.  So, they go back on, with a fresh wrapping of bar tape.  All that being said, I remain intrigued by the Salsa CowChipper bars, which look like a CowBell with about twice the flare.  I don't know how my wrists would respond to even more flare, but maybe next overhaul I'll consider experimenting with a CowChipper.

Stem (Thomson Elite 4X).  There's nothing complicated about this stem.  It's just strong, durable and, in this case, elegant.  No slippage or sway.  The right reach and angle.  A perfect perch for those CowBell bars and still gorgeous.  No polish necessary. 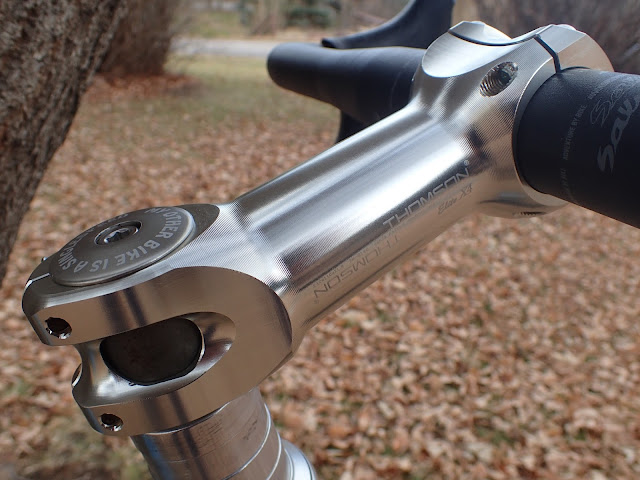 Saddle (Terry Liberator).  My longer distance road bikes have sported Terry Liberator saddles since the early 1990's.  Like the Time ATAC pedals, I stumbled into this saddle a long time ago, discovered that it fit just right and was comfortable for hours on end.  Lighter, more glamorous saddles adorned some go-fast bikes, but this model always seems to end up on the bike set up for longer rides.  So, when I built up this gravel bike, I naturally installed a new Terry Liberator.  Now, I simply cannot rationalize replacing a proven performer when it works so well and still looks good.  I'm always open to suggestions and maybe next overhaul I'll look at something else.  Maybe. 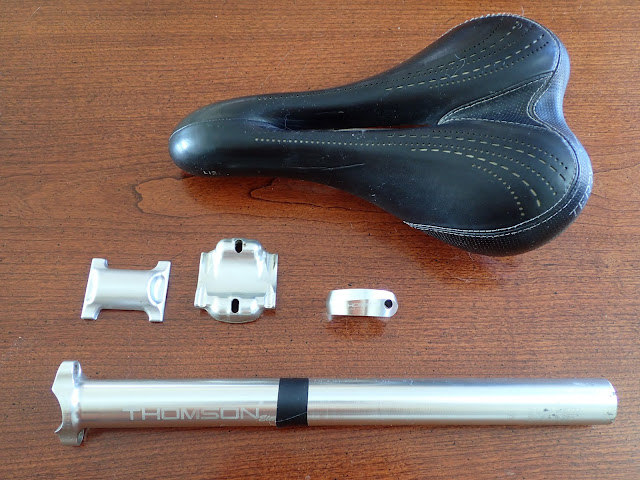 Seatpost/Collar (Thomson Elite/Thomson).  Like the Thomson stem, there's nothing complicated about the seat post.  An elegant component that happens to be strong and durable.  Easy to set right and then just forget about.  A perfect post for that comfy saddle.  Clean, regrease lightly and return to its rightful place.  And that collar looks like a sterling silver ring, securing holding everything in place over the roughest terrain.

Various designs of suspension seat posts are now available for rough road riding.  I think the general concept is solid and may well become a popular standard feature on many all road bikes.  But not mine.  This bike in particular is not the one for a seat post with moving joints or flexing carbon.  More fundamentally, this artfully designed rim-brake steel frame and fork, with quality 40 mm tires on wide 32 spoke rims, combine with the other components to create an exceptionally comfortable ride.  No suspension needed for me.

In summary, the control components of the handlebars, stem, saddle, seat post, and collar each work as intended.  No changes.
Posted by CrossTrail at 5:45 AM No comments: