GO in the face of NO

NO, it won't be the same gravel family get-together as in the past. But Race Directors Kristi and Perry Jewett are grinding it out in the face of difficult circumstances.

GO support this event, this year. It's worth keeping. And so is the community it fosters.


Starting in 2013, the Gold Rush Gravel Grinder blazed the trail for gravel cycling events in the Black Hills of South Dakota, attracting enthusiasts of all abilities and experience. Sporting a self-supported ethos out on the remote road course, the Gold Rush offered popular post-race festivities in an outdoor city park at the finish, including live music, catered food, local micro-brews, vendors, unique awards and a smorgasbord of door prizes and raffles. Everyone left with a smile.

This year will not be the same. On May 1st, in a thoughtful and heartfelt message to race entrants, Kristi and Perry announced that the Gold Rush would not occur in 2020 as planned due to uncertainties with governmental licenses and permits. No gravel block party this year.

But not all is lost. Kristi and Perry created a "virtual" Gold Rush event. One can participate by riding one of the four race distances (45 miles, 70 miles, 110 miles, 210 miles) on any route anywhere and sharing pictures of the experience. Kristi and Perry will post "results," ship out event schwag, and even award door prizes and other prizes. They are doing what they can do, making the most out of it for everyone. Details at Gold Rush Info & Registration.

I'm registered and plan to ride the 110 mile Gold Rush route, solo and single speed, on the day and time as originally scheduled. Others may be out there then, too. But if not there or then, others will be out there riding their own "virtual" Gold Rush.

I encourage you to ride along. Keep the vibe alive.

Posted by CrossTrail at 10:54 AM No comments:

The n+1 Struggle Is Real

A common cyclist joke:  How many bikes do you need?
n+1, where n = the number of bikes you currently own.

But it's not a joke. It's an addiction.

At one point in time, not long ago, I owned 11 bikes, including five different types of single speeds and two different fixed gears. I could always find a reason to add a new bike, but not to subtract an old one. I usually kept the old bike as a backup or loaner or, better yet, modified it for a new purpose.

After 30 years of living in conventional n+1 land, I commit to a new mindset and embark on a brave new journey to dramatically reduce my fleet. It isn't all at once and it isn't easy. Definitely the hardest to let go is my beloved classic Italian, lugged steel cyclocross bike. Letting Go. But I persevere. Eventually, my fleet bottoms out at three: a 2014 Black Mountain Cycles MonsterCross geared for roads, a 2008 Kona rigid 29er single speed for trails, and a 1991 Specialized RockHopper fixed for commuting.

One reward for subtracting all those other bikes is to add a custom built Jones 29 Plus LWB, geared for all purpose mountain biking and outfitted for bikepacking. Jones 29+ LWB - What It Is. None of my prior or existing bikes possessed the capabilities of the Jones 29+ LWB, especially for day long single track rides and multi-day camping. It is a big add, and a lot of fun. All is good.

What's so special about the Stormchaser? It's a rigid single speed bike designed from the ground up for long rides in bad conditions on rough unpaved roads, from a bike maker in this field for as long as anyone. There's no other production bike like it, in function or form.

It's singular. It's striking. It's simple. It calls to me.

However, pictures and reviews of the Stormchaser flood the media. It beckons. My mind drifts. I start thinking that it would be nice to have two all road bikes - one dedicated single speed and one dedicated geared. Oh, yes, that would be nice. Really nice. So signals the Siren Song of n+1.

The day may come when I acquire another bike. But it is not this day. This day I stay at n.


I am just riding along, enjoying a quiet day on the Spearfish route of the 2020 Black Hills Gravel Series. Cresting a small incline, I turn to face a barrage of signs. Yellow "MINIMUM MAINTENANCE" and "TRAVEL AT YOUR OWN RISK" signs scream of danger, as do the signs of a steep downhill and a sharp turn. Even "SPEED LIMIT 25" signals trouble ahead. But it's the dark orange "ROAD CLOSED" and "BRIDGE CLOSED" signs that catch my attention.

No, I do not turn around. I check it out. As a seasoned cyclist who regularly rides solo on remote rough roads, I carefully ride down that relatively steep, rutted, loose, curving descent and bottom out at a short, narrow bridge spanning a small creek bed. A second "BRIDGE CLOSED" sign barricades about 2/3 of the width of the road, leaving a wide lane for a cyclist or pedestrian to pass. The top surface of the bridge appears intact, no construction equipment is present, and nothing seems amiss, other than another "BRIDGE CLOSED" sign. I slowly ride over the short bridge without incident. 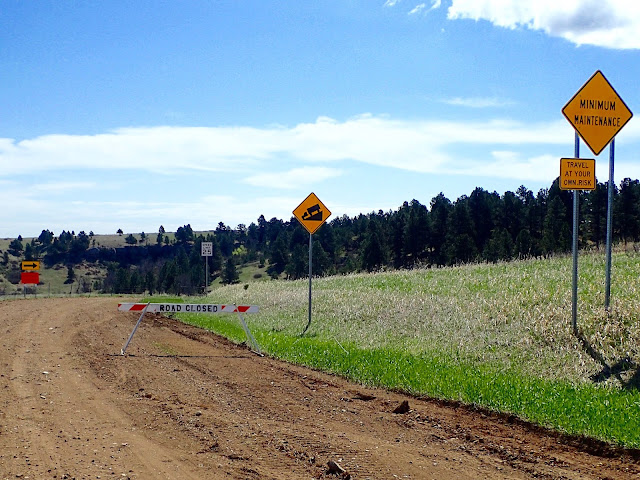 However, the sight of that sign barrage lingers in my mind.

I know that road and that bridge were built for motorists, and those signs are there for the average motorist. I understand. However, not everyone traveling that road is a motorist.

Not that I don't appreciate a cautionary heads-up, but those signs are not for me, or for any reasonably prudent cyclist or pedestrian. I could have ridden that entire stretch of road, without the benefit of any of those signs. I know, because I have ridden much worse roads, in much worse conditions, with no warnings. Absent those signs, I would have readily recognized those conditions and adjusted to them.

With those signs, many cyclists and pedestrians probably would pass through carefully as I did. However, some may blindly obey those signs and turn back needlessly. Others may not believe the blanket admonitions and plunge forward heedlessly. That's the problem with top-down, dictated solutions that are one-size-fits-all, or even one-size-fits-most.

I encourage you to thoughtfully consider such limits, prohibitions and requirements sought to be imposed on everyone, whether out on a remote road or elsewhere. Reasonably prudent adults in a free society can assess the risk of a situation and decide how best to proceed. Over time, the individual decisions of large numbers of free thinkers always surpass the detached decisions of the elite few. The history of America proves it.

Posted by CrossTrail at 6:27 PM No comments: