The Start: NoWhere, North Dakota to the Geographic Center of the United States

The Black Hills BackBone is a cross state remote road ride from NoWhere, North Dakota to NothingThere, Nebraska along the spine of the Black Hills.  The start of this 300+ mile journey lies at the northern border of South Dakota, less than 20 miles east of Montana, on Table Mountain Road (Harding County Road 733).    There's actually a carved stone marking the state border, if you look for it long enough, are willing to hop a barbed wired fence, and cross a solid 50 meters of cow pie laden pasture.  Notwithstanding the marker, it's still way out there.  It's still NoWhere, North Dakota.

So, here's the first 80 miles or so of the Black Hills BackBone, from the Start to the Geographic Center of the United States in rural Harding County, South Dakota.  That seemed like a good place to stop for a spell.

Riding south on Table Mountain Road (733) at Mile Marker 0, angle West (right) after about 1.5 miles and spin south on wide open prairie gravel, with Table Mountain looming to the East.  Ride within the posted speed limit.  It's 300+ miles to Nebraska.

After about 9 miles from the start, turn West (right) onto Ladner Road for 4 miles heading west and then a sweeping turn to the south for 2 more miles.  These are prairie gravel roads, with generally long sight lines and significant exposure.  The gravel typically is not too thick and usually has two, sometimes three, tracks to follow.

After those 6 miles on Ladner Road, there's a 90 degree West (right) turn.  Do not take that, but continue South (straight past that intersection) on what is now called Bullock Road.  After 7.5 miles, continue on Bullock Road by turning West (right) at a t-bone intersection.  Ride West for 2.5 miles, where Bullock Road turns South (left) for another 8.5 miles to paved U.S. Highway 20.


As you can see, there are not many roads out there, but they often do not stick to a single north-south or east-west direction for a given name.  It's probably a good thing this is the beginning of the BackBone, before the eyes cross and the mind wanders.

At paved U.S. Highway 20, turn West (right) for about 0.5 miles, then turn South (left) back onto gravel on Harding Road.  This is a nice, rolling stretch of prairie, with a smattering of buttes and hills rising on both horizons.  There are even a few patches of pine trees up in some of the hills, as well the prevailing cottonwoods along the creeks and drainages.  Out here are coyotes, fox, skunk, jack rabbits, quail, hawks and eagles, as well as hundreds of buffalo. 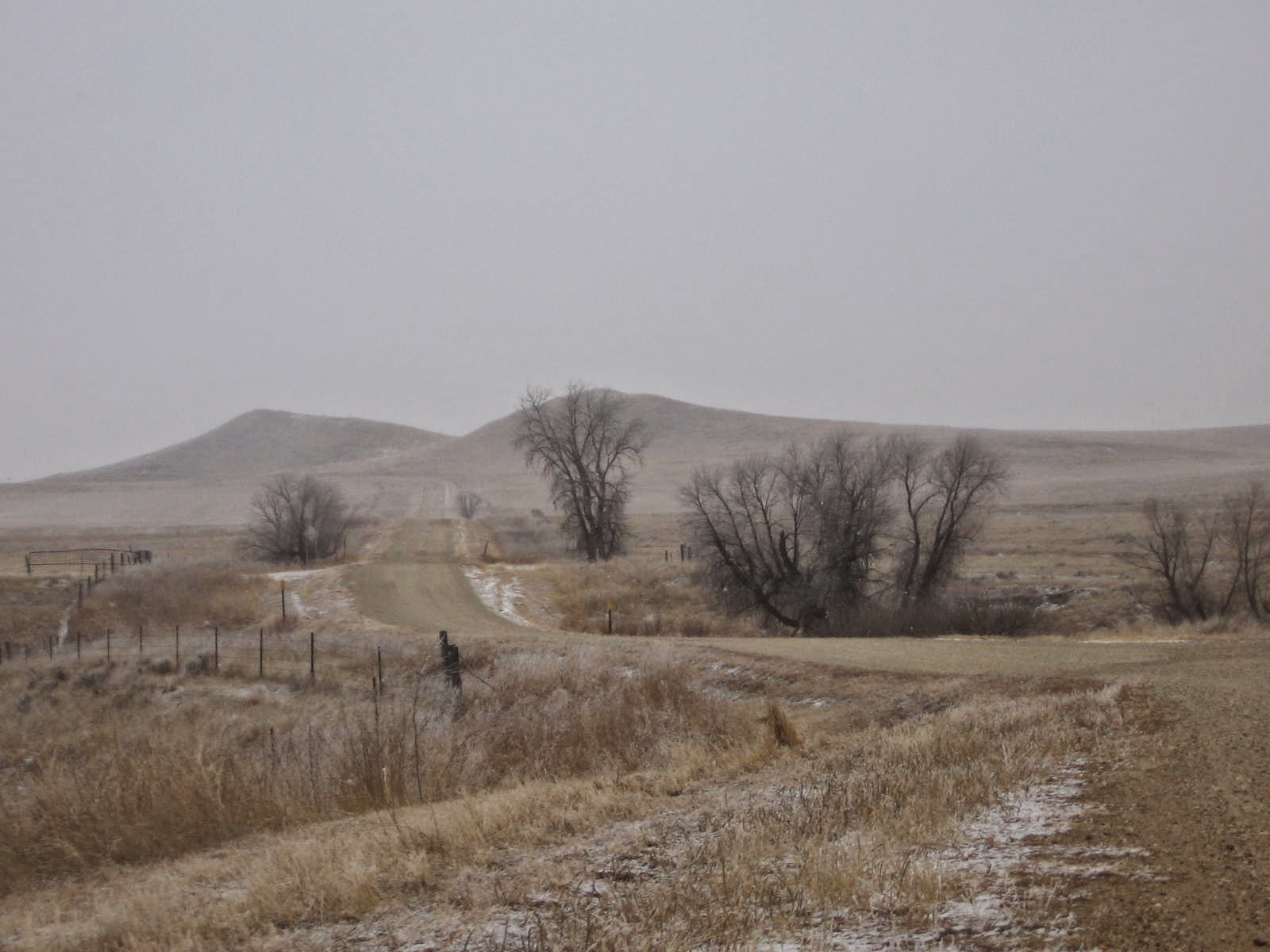 After 13 miles on Harding Road and about 47 miles into the BackBone, we'll stop at the almost dormant town of Harding for water, as there are few opportunities in the next 80 miles or so.

With water topped off, continue South out of Harding on Harding Road for about 18 miles, where it t-bones into Old Highway 85.  Turn West (right) for a 13.8 mile shot to today's destination:  the Geographical Center of the United States.  I do not know how one determines such things, or why anyone would do so, but there it is.  Pay careful attention to the East (your left) because it's really easy to miss.  There's a rock cairn and a handwritten sign at the fence line beside the road.  A bandit foot path leads to the actual U.S. Geological Survey marker about 100 meters out onto the prairie. 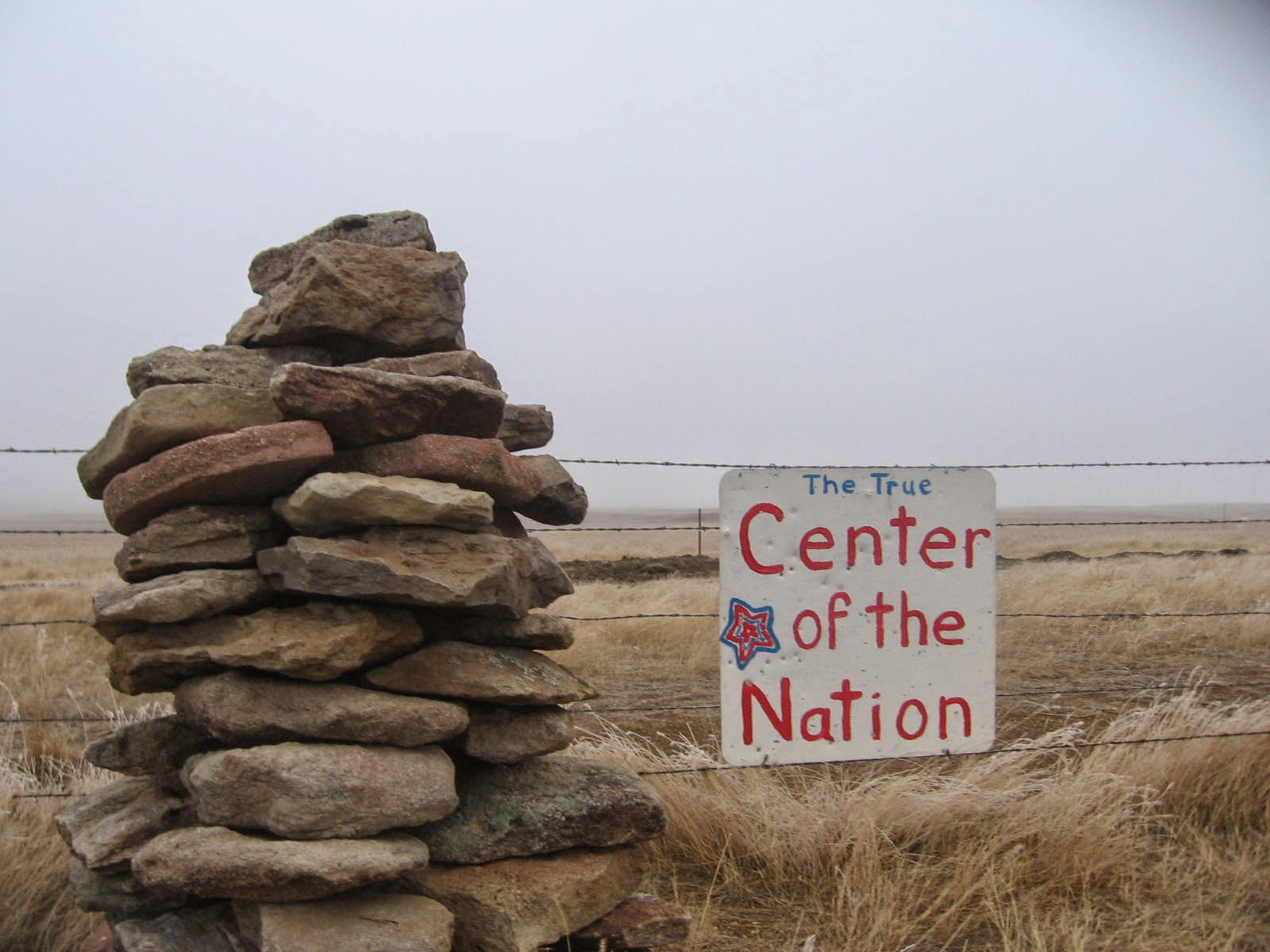 That's the first 80 miles or so of the Black Hills BackBone.  Route followers will notice that I changed the Start Line from my earlier post entitled "The Big Picture."  My initial plan was to start on Camp Crook Road (Harding County 867), less than 3 miles from the Montana border.  However, when I actually got up there, I found not the expected gravel, but pavement for the first 12 miles.  After some scouting about, I chose this new Start Line.
Posted by CrossTrail at 7:35 AM