The Black Hills DoubleBackBone route flows from the BackBone finish at NothingThere, Nebraska along a sweeping loop of rugged, remote roads in the Western Black Hills back up to the heights of O'Neil Pass. U.S. Forest Service secondary roads cover most of these miles, connected with a few primary and several primitive roads. This route gets out there, and then up there. I like it a lot and I'm sticking with it.

Unfortunately, the DoubleBackBone cannot continue as a loop from O'Neil Pass, without losing its character. Too much pavement, too much development, too much traffic, too much Wyoming. So, I'm dropping the arbitrary notion of a single loop. I'm going with a great route that I know well.

Of course, that route is the Black Hills BackBone. So, from O'Neil Pass, the DoubleBackBone will backtrack on the BackBone route to Spearfish, east around Orman Dam and back up to U.S. Highway 85 by Harding Road and Camp Crook Road. As a result, a map of the DoubleBackBone will look like a large balloon south of O'Neil Pass and a large balloon north of Belle Fouche, connected by a string.
﻿﻿
Yes, Robbie Sorge, that means a return to Tinton Road, that dust-choking, tourist-trafficked sludge of a climb from Spearfish on the Black Hills BackBone. But this time, it's almost all downhill. And it's now only 17 miles on Tinton Road before turning onto Higgins Gulch. So, saddle up, cowboy.

From U.S. Highway 85, turn north on Tinton Road (134) over a couple of surprising rollers before the long descent to Spearfish. After 16.9 miles, veer west on Higgins Gulch Road (214) to continue the quick descent for another 12.1 miles. Eventually, Higgins Gulch Road T-bones into paved Hills View Road on the northwestern outskirts of Spearfish.

Turn east on Hills View Road for 2.5 miles to U.S. Highway 85. Stop. Before turning north toward the Northern Prairie, check supplies and gear. Spearfish is the largest town on the entire DoubleBackBone route, offering convenience stores, grocery stores, restaurants, motels, a city campground, a couple of bike shops, and even a community rec center for a kettle bell or yoga class. If needed, now's the time.

When girded for the grind, ride north on U.S. Highway 85 for 1.7 miles to paved Kerwin Lane, turn east for 1.9 miles and then north back on gravel on Lookout Mountain Road. Now, we're getting back out there. Pay attention on the sharp descent off Lookout Mountain Road, which is greasy when wet and can be rutted when dry. This stretch is reminiscent of many miles of rutted, gutted, loose, messy, steep dirt roads at the legendary Odin's Revenge gravel race.
﻿﻿﻿﻿﻿﻿﻿﻿﻿ 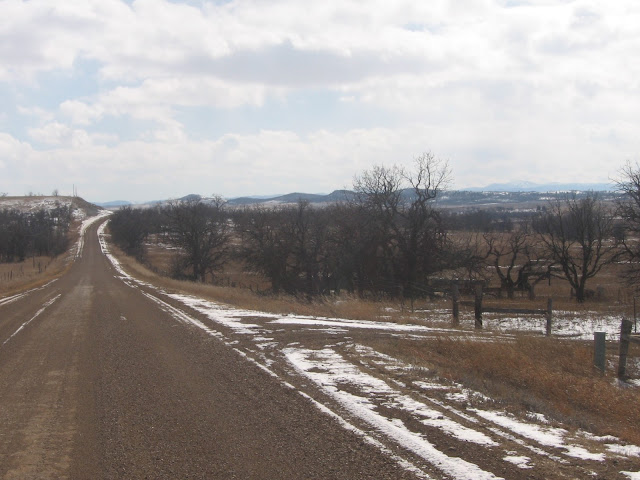 After 2.8 miles on Lookout Mountain Road, turn east on St. Onge Cutoff Road (196th Street) for a hilly, curvy spin through pastoral cattle and horse properties. A quick 4.0 miles later, turn south on paved U.S. Highway 34 for 1.9 miles to the one bar town of St. Onge. This is the last chance commercial establishment until Camp Crook, nearly 100 miles of open prairie to the north.

From St. Onge, turn east on Sale Barn Road, which is paved for about 0.5 mile, improves to gravel for about 0.2 miles and then turns 90 degrees north on gravelly dirt for another 2.2 miles. Virtually impassable when wet, this minimum maintenance road is specifically included as a tribute to the founding father of the modern gravel grinder, Mark Stevenson and his Trans Iowa gravel race.

Turn north on Crooked Oaks Road for 5.6 miles of sweet, hilly gravel through groves of oak and past a pioneer era cemetery. Then it's west on more heavily traveled and heavily graveled Snowma Road for a short 0.7 miles, before turning north on Fruitdale Road for 2.8 miles. Midway along this stretch lies Fruitdale, a collection of inhabited buildings in various states of disarray, but no commercial establishments. Continue north through Fruitdale to T-bone with U.S. Highway 212 and turn east for 1.7 miles to paved Arpan Road.

Riding north on Arpan Road, the DoubleBackBone rolls past small ranches and irrigation channels supplied by the Belle Fouche Reservoir. Shade is small and infrequent, as it will remain until the North Dakota border 120+ miles away. After 12.9 miles, turn west on Brooker Road for 7.3 miles of small rollers to merge with U.S. Highway 85.  Stay west on U.S. Highway 85 for 2.4 miles to Camp Crook Road.

Finally, we're ready to set sail into the Northern Prairie.

Posted by CrossTrail at 6:11 AM