I do not like transporting my precious bicycle on the outside of a vehicle. Never have. If I cannot ride from home, I prefer to secure it inside for the drive to the start. That generally has not been an issue over the years, with our versatile vehicles and typically just one bike to transport. For example, for the C.O.G. 100 in March, I drove almost 1200 miles round trip in my old Camaro with my Black Mountain monster cross bike tucked inside.

Now, I'm looking ahead to more regularly drive distances for rides, races and events, more often with a passenger and maybe with more than one bike. So, I've been researching options for transporting bikes on the outside of a vehicle. 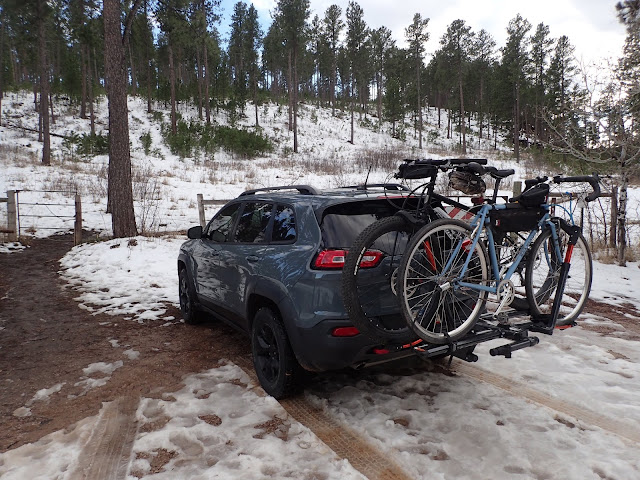 Many friends use roof racks, which offer the flexibility to carry a variety of other things, such as skis, kayaks, and luggage. But I don't like them. It's always a pain to lift the bikes onto the roof, with the possibility of damaging the vehicle, and some require removing the front wheel. In use, they add wind noise and reduce gas mileage. Even worse, I'm always thinking of bugs and other air-borne particles at 75 mph being plastered onto the surface and drilled into every recess. Of course, there are the horror stories of even experienced cyclists driving into the garage with bikes on the roof. Roof racks are just not for me.

So, I quickly moved to rear mounted racks. I have used those clamp-on types that adapt to work with most any vehicle. They're inexpensive and work OK, with some fiddling. They're fine for what they are, but I sought something more substantial. I wanted something to securely and confidently transport a pretty hefty Jones 29+ LWB bikepacking bike and a not insubstantial Black Mountain Monster Cross bike. Something substantially more substantial.

Hitch mounts. Ooh. With trays. Yeah. That's it. That's what I'm looking for.

Several companies offer really nice hitch mounted bike racks, such as the Thule T2 Pro XT, the Saris Super Clamp EX, the Yakima Dr. Tray and the 1-Up Super Heavy Duty. I doubt one could go wrong with any of these. 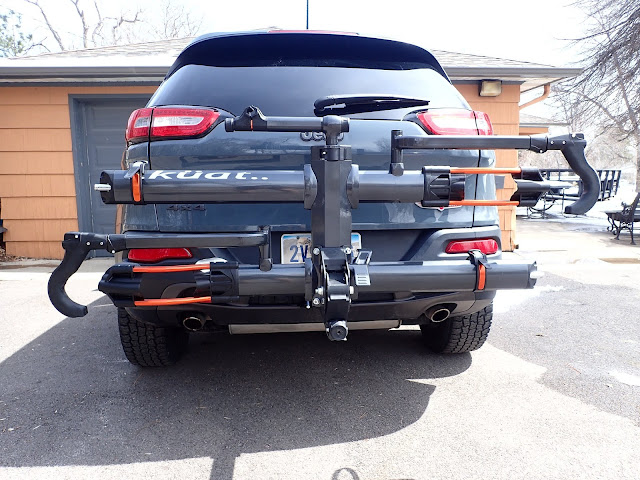 Then I found the Kuat NV 2.0. Whoa. Form, meet function. A beauty and a beast. Now, that was a design that appealed to the engineer/patent lawyer still lurking within me. Reviews repeatedly raved of its high quality and versatile utility, with the primary negatives being relative weight and cost. But I'm hardly a weight weenie and the alternative racks cost nearly as much. My search was over.

A few days later, a large, rather heavy box arrived at home base. Some assembly required, but not much. Easy peasy to put together and put onto the Jeep. Even easier to put the bikes on the rack. This looks to be most excellent. Can't wait to get out there. 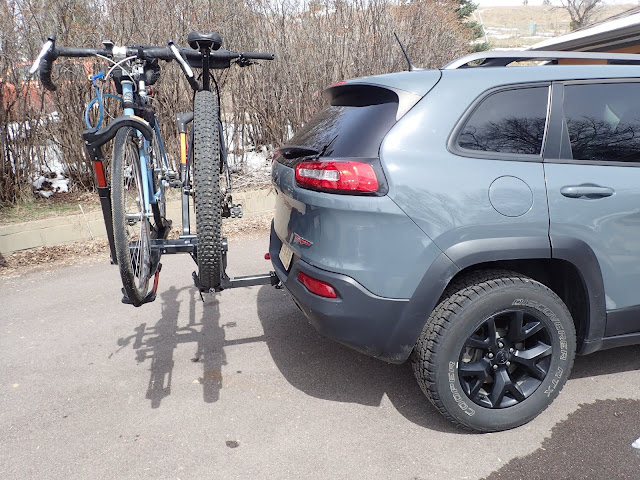 Posted by CrossTrail at 7:44 PM