Once out riding on gravel in winter, I was astonished by the number and length of rides possible, even here in Western South Dakota. See my 2015 post, A Revelation. After several winters of riding primarily prairie gravel, I decided to head back into the Black Hills this year. After all, my Black Mountain Monster Cross with 40 mm tires handles a couple of inches of snow just fine and now I have a Jones 29+ with 3.25 inch tires for heartier stuff.

I decided to complete my Black Hills Gravel WarmUp Cup by riding each of the four Black routes based out of Hill City, aka the Heart of the Hills. During my first ride, however, I soon discovered that the depth and inconsistency of the snow on those rough backroads would make any of the Black routes (50+ miles/5,000+ foot elevation gain) a monster outing for me. Looking more to build base than to destroy my body and mind, I opted for the shorter Blue routes (25+ miles/2,500+ foot elevation gain). Those were a'plenty. Here's my summary. 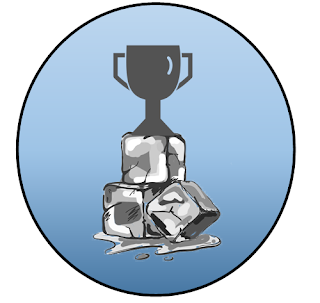 To kickstart the Black Hills Gravel WarmUp Cup, I dove into the Hills to ride the 2017 Hill City Black Route. That was the plan, anyhow. Right from the start, however, I slogged through ice, then packed snow, and eventually untracked snow riding up China Gulch Road (USFS 249) and Horse Creek Road (USFS 530). When finally emerging on Mystic Road, I reassessed time, light, and energy and opted for the shorter Blue Route.

It was a great day on the bike, with big sunshine, moderate temperatures, and little wind. For the most part, the snow was either just 1-2 inches, which I could ride through, or hard packed enough to ride on top. My Black Mountain Monster Cross bike with 40 mm tires worked fine.

With all the snow, however, those 30-some miles still worked me. So, I guess I'll stick with the Black Hills Gravel Series Blue routes for my first WarmUp Cup.

2. 2018 Hill City Blue Route (WarmUp Cup #2 - January 13)
The WarmUP Cup encourages folks to ride throughout the winter by spacing four rides at least 10 days apart from each other. So, 11 days after riding the 2017 Hill City Blue route for my WarmUp Cup #1, I ventured back to Hill City to take on the 2018 Hill City Blue route.
Once through the pavement of Hill City, the 16 miles or so up China Gulch Road (USFS 249), Horse Creek Road (USFS 530), and Mystic Road are the same as the start of the 2017 Hill City Blue route. Although no new snow appeared to have fallen over the past 11 days, this stretch was full of winter. China Gulch started icy and turned to packed snow. Then Horse Creek started filled with untracked snow and eventually offered a couple of tracks packed by a vehicle or two. Mystic Road was just icy. Overall, it was at least as much work as 11 days ago, as the snow didn't melt away, it just became more dense.
Although overcast and cool all day, the wind didn't really pick up until I turned south on Mystic Road and then Battle Axe Road (USFS 386). That meant a sweet tailwind for about 10 miles and then 2 miles down Reno Gulch Road (USFS 303) into Hill City. Overall, it was a good day to get into the Hills before more snow falls.
3. 2019 Hill City Blue Route (WarmUp Cup #3 - January 24)
Just 11 days after riding the 2018 Hill City Blue route for my WarmUp Cup #2, I returned to Hill City to take on the 2019 Hill City Blue route. During that week and a half, however, snow accumulated a few times throughout the Black Hills. So, I decided to take my Jones 29+ bike to have the best chance of riding those 30 miles.
After a short section of Mickelson Trail, most of this route followed USFS Secondary roads stuffed with 2-4 inches of snow. All were rideable on the packed tracks left by a few vehicles, although it was slow and arduous. Twice I stopped to drop the pressure in those big 3.25 inch tires to stay atop the snow. I doubt I could have ridden that route on that day on anything less.
The day started mostly sunny, cool at 24 degrees, and breezy and didn't change much. The gradual climb up Spring Creek Road (USFS 305) and Reno Gulch Road (USFS 303) had just enough traffic since the last snowfall to pack a couple of rideable tracks. Onto Newton Fork Road (USFS 304), the number of vehicle tracks dropped significantly, making for tougher sledding. Fortunately, well over half of that 6 miles is downhill, which I rode mostly on untracked snow. Then Battle Axe Road (USFS 386) was much like Spring Creek and Reno Gulch. Overall, the Blue route in those conditions was every bit as difficult as the Black route in summer.
4. 2020 Hill City Blue Route (WarmUp Cup #4 - February 3)
For my fourth and final ride of the 2021 Black Hills Gravel Challenge Cup, I returned to Hill City to ride the 2020 Hill City Blue route. I briefly considered riding my Black Mountain Monster Cross bike, but fortunately returned to reality and loaded up the Jones 29+.
Once out of the pavement of Hill City, the first 12 miles or so up the Mickelson Trail and Spring Creek Road (USFS 305) are the same as the 2019 Hill City Blue route. But those miles did not ride the same this week. Bright sunshine and 48 degrees softened the Mickelson Trail, even where it was clear of snow. Then Spring Creek Road was mostly packed from some traffic, but also was very soft. Those first 12 miles, almost all uphill, demanded hard, consistent pedaling with attention to staying atop the snow. I needed every bit of the width of those plus-sized tires on the Jones 29+.
After topping out another climb to a ridge line on Reno Gulch Road (USFS 303), the route inexplicably turned onto ATV trails for over 3 miles, the first mile of which offered 4-6 inches of untracked snow. I stopped twice to drop tire pressure, until it was down into single digits. Then the next 2 miles were a delightful mix of snow, ice and mud, as I careened downhill. A Lucas Haan designed route is never over 'till it's over.
All in all, this was an appropriate ride to complete my Black Hills Gravel WarmUp Cup! Thanks, Lucas!
Nothing like a little Chicago, the rock band with brass, to show how to feel stronger every day.
Feelin' Stronger Every Day, Chicago (1973)
And here's a solid cover by Leonid and Friends, a Russian band, 45 years later.
Feelin' Stronger Every Day, Leonid & Friends (2018)
Posted by CrossTrail at 5:03 AM