He hath need of his wits who wanders wide,
aught simple will serve at home;
but a gazing-stock is the fool who sits
mid the wise, and nothing knows.
Havamal (The Words of Odin) - Wisdom for Wanderers & Counsel to Guests, v.5, Snorra Edda (anc.)

The Buffalo Bill Rough Rider Gravel Grinder is a new event out of North Platte, Nebraska that looks to be an instant classic, with its historic setting, unique backcountry roads, and community-focused event directors and volunteers. Although the event is new, it ventures onto remote roads that enter the ancestral realm of the legendary Odin's Revenge. See, Knock, Knock, Knockin' On Odin's Door. That takes it to a whole nother level.

Just the sight of those dusty hills in a Buffalo Bill Rough Rider promotional piece resurrects a flood of memories from the race that sparked my passion for gravel riding. Back in 2013, 2014 (The Mud Year), 2015 and 2016, I cranked, pushed and dragged my bike almost 68 hours of official race time to reach 4 finish lines at Odin's Revenge. That leaves a mark.

Although beautiful, the course was relentlessly brutal. Hot, rutted, loose steeps clawed up to rolling ridge lines, before plummeting into the next canyon. Roll a bit, then back up again. Roll a bit, maybe, then down again. And again. Odin's Revenge extracted a continuous physical, mental and emotional toll, all day and into the night.

I loved it. Everything about it. The roads, the country, the event, and especially the people. I would have loved to continue that journey in 2017 and beyond. But Odin, as he is wont to do in his endless search for wisdom, wandered away from his realm and has yet to return. There's been a hole in the gravel scene ever since.

But it's not all gone. I kept secure my paper cue sheets from those four years at Odin's Revenge. I can go back, with or without the grumpy old man, anytime.

But time passes and I don't. Sure, I think about it, especially on Valentine's Day, which Odin called Gravel Lovers Day to mark the opening of post card registration each year. But I don't go back. More time passes.

Then last fall I road-tripped to Marysville, Kansas for the Pony Express 120 Bikepacking Adventure created by cycling buddy Paul Brasby. See, Pony Express Bikepacking Adventure. On the drive home, I stopped for a few days to check out his stomping grounds at Potter's Pasture, a sweet private park with publicly accessible trails and campgrounds set deep in the rugged hills of west central Nebraska. See, Potter's Pasture FaceBook Page.

While the trails were cool, I remembered Potter's Pasture as a check point each year for Odin's Revenge, which started and finished in nearby Gothenburg. From a ridge line vista along a Potter's Pasture trail, my eyes wandered to the rough roads meandering into the surrounding backcountry. My thoughts drifted.

Revelation. These remote roads are calling me back. And Potter's Pasture is delivering the invocation.

Now, months later, the Buffalo Bill Rough Rider photographs prompt me to dig out my old cue sheets from the 2014 Odin's Revenge, the infamous "Mud Year." Because only 6 riders finished that year, Chad Quigley repeated that course in 2015 so more could enjoy it. It was my favorite Odin's Revenge course. I'd love to ride it again.

To stoke the fires, I use those old cue sheets to create a new ridewithgps.com digital map of that 2014/2015 Odin's Revenge course, with a new start/finish at Potter's Pasture. Yes, that would change the experience a bit, but I think every ride out there is a unique experience. To see the route, go to Wandering Wide.

Daydreaming of a weekend spent riding that course and camping at Potter's Pasture, I realize that some folks might really enjoy this course, but maybe not in a single, long day. So, I create two loops out of Potter's Pasture that together cover the entire 2014/2015 Odin's Revenge course. The loops are about 100 miles each that one could ride back-to-back during a single weekend. Half and Half of Wandering Wide.

Now, we're rolling. I think of the many riders at Odin's Revenge that chose a short course option of about 60 miles. Then I think of newcomers looking for a taste of Odin's, rather than a royal feast. They'd all probably enjoy a weekend at Potter's Pasture riding these roads, too. I need to make some shorter routes.

Rather than try to adapt the prior Odin's Revenge short courses to a Potter's Pasture start/finish, I simply create four new routes with ridewithgps.com. Each of these new routes is a 40-50 mile loop on surrounding rough roads and include some portion of the 2014/2015 Odin's Revenge course. I think these routes look fun from satellite images on a computer while I'm sitting far away in South Dakota. However, before riding them, I'd look for input from local cyclists with first hand knowledge. That's you Paul Brasby, Jeff Caldwell, Ben Cooper, Bobby Lee Denny, Luke Meduna, Lane Bergen, Amy Smith and Randall Smith. Let me know if you'd change anything. Potter's Pasture Gravel Loops.

With the maps created and the day dreamt away, all I need now is to carve out some time and commit to a long weekend at Potter's Pasture. However, my June, July, August and September 2021 are already booked pretty solid, so maybe early spring or into the fall later this year. Or, more likely, next year.

Here's The Wanderer, by U2 featuring Johnny Cash on lead vocals.

Here's a screen shot of my ridewithgps.com route of 2014/2015 Odin's Revenge course, but with a Potter's Pasture start/finish. 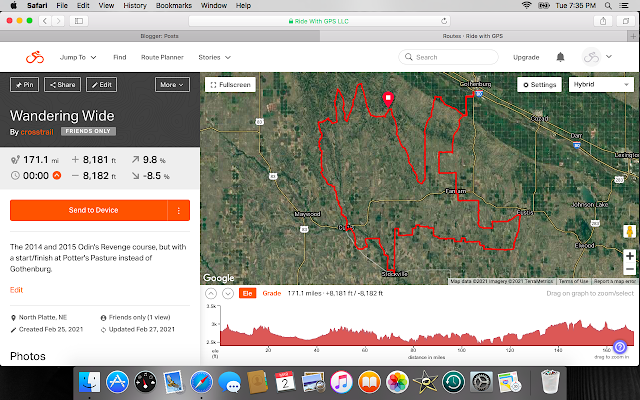 Here's a screen shot of my ridewithgps.com collection of two century loop routes from Potter's Pasture that together cover the entire 2014/2015 Odin's Revenge course. 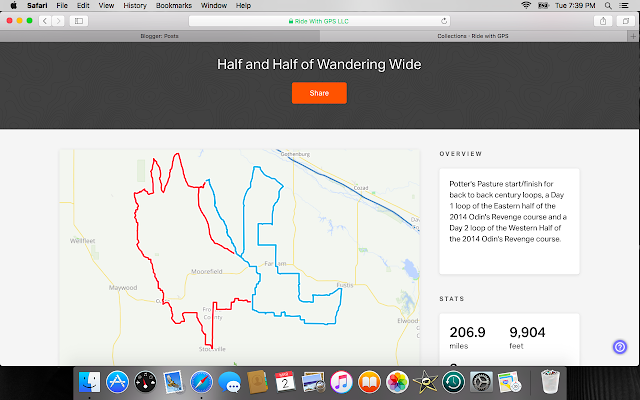 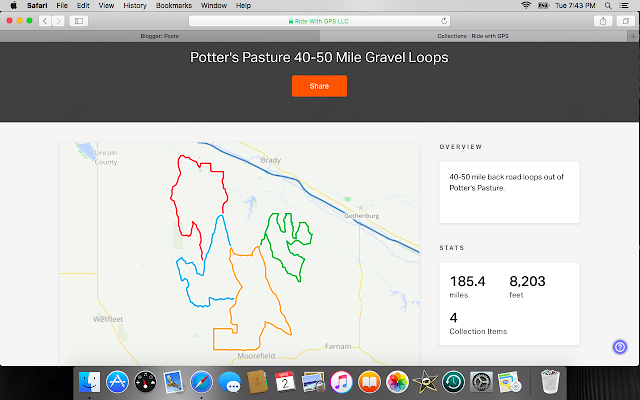 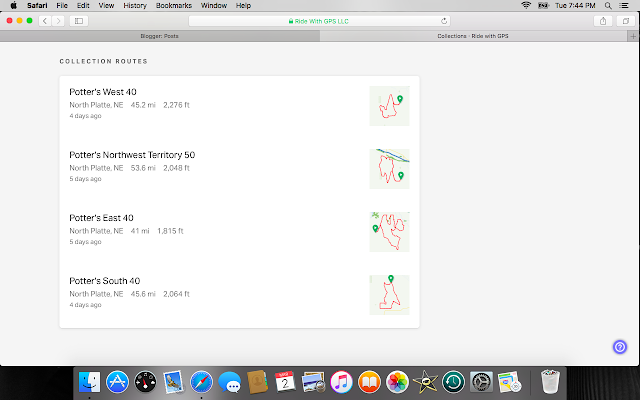 Posted by CrossTrail at 5:15 AM