He roller coaster. He got early warning.
He got Muddy Water. He one mojo filter.
He say, "one and one and one is three."
Got to be good looking, cause he's so hard to see.
Come together, right now. Over me.
Come Together, John Lennon & Paul McCartney (1969)

Like the Beatles song above, we have no real reason to come together. No deep meaning. No profound message. No life changing experience. We just want to ride our bikes together for a week on back roads in the Black Hills of South Dakota.

Over long days of riding with Paul Brasby last year at the Cloud Peak 500 (Cloud Peak 500 Wrap) and the Pony Express Bikepacking Adventure (Take A Back Road), we hatch the idea of a multi-day, multi-surface bikepacking ride in the Black Hills. I'll create the route and he'll invite some friends to join us.

Over the course of several months, I piece together some of my favorite roads, scout combinations and connectors, ride into a few road blocks and dead ends, and discover more than a few gems. My biggest issue is simply choosing between the staggering number and variety of Forest Service roads in the Black Hills. Among many great options, I eventually create an outline for a 5 day ride designed for a rider like Paul on a bike like his Salsa CutThroat loaded for bikepacking. I call our ride The Black Hills Bounty for the abundance of treasure lying within. Scouting A Route For Friends, The Good, The Bad & The Ugly, Looking For Black Hills Bounty.

Meanwhile, back at the ranch in North Platte, Nebraska, Paul rounds up a posse of strong, experienced endurance cyclists to track down this Black Hill Bounty. With his 30+ years of racing, Paul knows many accomplished cyclists and receives much interest in this ride from many quarters. The only question is who will carve out a week to journey to South Dakota to join us.

Right off the bat, Ben Cooper, a fellow engineer and endurance athlete from North Platte, jumps aboard and starts to sort out how to outfit his hard-ridden fat bike for bikepacking. He would have made it work, but a week before the start, Ben scores a new Salsa CutThroat. Yes, somehow that racing rascal and business mogul Jeff Caldwell, owner of White Tail Cycle Sport in North Platte, manages to find a new CutThroat for Ben. After riding a couple of paved miles to adjust fit, Ben calls it good and loads it up.

Also in early is Lane Bergen, a western Nebraska native now an HVAC professional in northern Colorado. Among other things, he is a Tour Divide veteran who bike packed with Paul last year in the high mountains of Colorado. Lane travels fast and light on his own Salsa CutThroat and brings a dose of quiet confidence and youthful vitality to the group.

"I go where you go," is the response to practically every question I pose to Jeff Bloom, an endurance cyclist and Lutheran pastor from Lincoln, Nebraska. But he's no patsy. Behind that easy smile and comfortable demeanor lies a passionate, tough competitor who powers his fat bike at gravel bike speed in endurance races all over. When he's in, he's all in. And he's sure to be the first to make coffee every morning.

Postmaster and Pony Express Race Director Mark Hoffman of Marysville, Kansas completes our roster. Rehabbing from knee replacement surgery in January, Mark custom paints his Salsa CutThroat an amazing candy coat of colors and then works his way back into shape. He runs a booth at the event formerly known as Dirty Kanza on Friday, rides the event on Saturday, drives home, packs up, drives to Lincoln to pick up Jeff, and then drives all day just to get to the Bounty by Sunday night.

These guys are serious about having fun.

Given their long journey that day, Mark and Jeff drive straight to the start at a dispersed camp site near the top of Bear Mountain. But, with a little time, itchy shifters, and frisky feet, Paul, Ben and Lane look to break out a little pre-ride. By mid-afternoon, Paul checks his family into the Custer Crazy Horse Campground, where they will be vacationing for the week. By arranging to park their vehicles there, Ben and Lane join Paul for a 16 mile, late afternoon warmup ride up Bear Mountain. To burn off some of their crazy, I send them up Custer Limestone Road for the big switchback climb ending with a view of the Crazy Horse Memorial.

By early evening, everyone arrives atop Bear Mountain. We enjoy a cool evening double checking bikes and gear, reviewing maps, and re-connecting. Beverages and chocolate chip cookies may also have been involved. In addition to digital maps loaded onto their various devices, I hand each of them a hard copy map for each day's route. If nothing else, they'll get a sense of how I find my way around these parts.

We talk through the route for Day 1. Right from the start, we change plans. Just two days ago, I checked out our planned descent off Bear Mountain to find the road barricaded with barbed wire and serious signs. So, I find another way that promises to be even better. Rather than a 2 mile technical drop to a Primary road, the re-route more gradually descends almost 6 miles on Low Standard roads and offers surprising views. Our first audible of the ride comes on the first mile of the first day.

Our Black Hills Bounty is not a race, not an event, not a destination, and not even a fixed route over a set number of days. Yes, we have a route planned for each of 5 days and we definitely have a long list of highlights to hit. But we also have flexibility to shorten, lengthen, or just change the details as we see fit. In other words, the Black Hills Bounty is an outline for a week of backcountry riding and camping with friends.

As the sun slowly sets on Day 0, we reluctantly slip into our tents to await the sunrise. 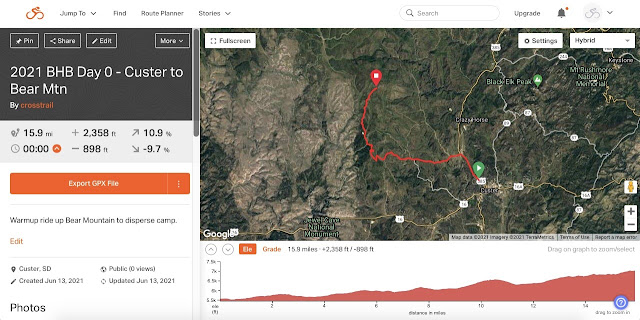 Here's the Beatles performing "Come Together" in 1969, although I think the animation is more like 2019, probably by someone on 50 year old acid.

Posted by CrossTrail at 5:20 AM