By 2015, Odin's Revenge is a fixture on my summer calendar. Due to the Platte River flooding the KOA camp ground, Team DSG shifts the pre-race gathering to the Walker Steakhouse, a fabulous environment for folks to meet and re-connect over music, drinks and dinner. That kicks off the weekend just right. The party then rolls to the City camp ground, as folks share stories and laughs over the camp fire well into both Friday and Saturday nights. It seems that the only interruption in all the festivities was a little bike ride on Saturday.

Oh, but what a ride. A classic Odin's Revenge course. 180 remote miles. Short, steep, powdered dirt climbs and descents. Longer, steeper, more powdered dirt climbs and descents. The torrential rains of 2014 had cut deep, irregular shaped channels down the steep, non-maintained dirt roads, creating a white knuckle focus fest to keep your wheels from being swallowed whole. In many cases, the descents are harder for me than the climbs. Fortunately, those 35-40 miles of dirt roads are connected with miles of great gravel. As usual, the hills, heat and winds test all, but the primo gravel conditions lead to twenty-four racers eventually finishing.

For a race report by the overall winner Greg Gleason, go to his blog. 2015 Odin's Gleaso.

Professional photographer Wally Kilburg journeyed from Illinois to shoot the event and captured many amazing images, some of which appear in these race reports. He also posted a gallery of many more images on his website, but I cannot access those now.

Here's my race report for the 2015 Odin's Revenge from the Black Hills BackBone blog.

Odin's Revenge. The gravel scene at its very best. In a small Nebraska town of about 3,500 folks, a small group of friendly, thoughtful cyclists took the time and energy to create a wonderful grass roots event that showcases the natural beauty of their area. Those fortunate enough to experience Odin's Revenge invariably ink it on the calendar for the following year. Not to be missed.

This year I'm riding Odin's Revenge as part of the ChristianCycling.com Build The Body ride. On that day, folks all over the country will be participating with their own rides, races and events to support Christian Cycling and our ministry partners Samaritan's Purse, Teen Challenge and Athletes in Action. One of our slogans is "Unite and Light," that is, to bring Christian cyclists together in fellowship and show Christ to the cycling community. I'll be the only one wearing the team kit at Odin's Revenge, but I won't be riding alone.


The gathering of the Odin's gravel clan starts in earnest late Friday afternoon at the old school Walker Steakhouse in Gothenburg, Nebraska. You know the drinks will be cold and the steaks will be fresh, with a stockyards just up the road. Laughter and boisterous banter rock the old dance hall, as friends, new and old, share stories of days past and anticipate the day ahead. Race organizers Chad Quigley and Matt Bergen, and the rest of Team DSG, brief the course, checkpoints, conditions, forecast and expectations. A bounty of swag is scooped up. Folks linger, savoring.


Reluctantly leaving the pre-race social for the campsite, I prepare for the early start while fellow racers and crew filter in. It's another special time, hanging out with the camping sub-clan of the gravel clan. It's a real treat to share the campsite with Wally Kilburg, the professional photographer for the event, and gravel royalty Greg Gleason of Sioux Falls. Too soon, it's time to try to get some sleep before that 4:30 alarm.

But not before I adjust my gear to lighten my load. Greg's enthusiasm persuades me to try something different. I pretty much know how to meter out energy over a long race to finish within typical time limits. But I didn't really know what would happen if I deliberately push the level of effort up a couple of notches from the start. Hit it hard early. Travel lighter. See what happens.

Mingling at the start in the pre-race darkness, I search in vain for Kevin Fox, who is just starting a college campus ministry in Omaha and was driving in on virtually no sleep to get here. I had hoped to share a prayer with him, but he is not to be found. Moments before the race starts, I hear a voice say, "Craig, would you join us? We're going to pray." It's Ben Cooper of Team WhiteTail, a small, passionate group of cyclists from nearby North Platte. Build the Body, indeed. Thanks.

We anxiously roll out for about 15 miles of dry, relatively fast gravel roads, before abruptly turning 90 degrees onto what looks to be barely a cow path. It's Brushy Road, our introduction to 35+ miles of "Minimum Maintenance Roads." Time to turn it up a notch.

These barely built and not maintained dirt roads offer very loose, almost talcum-like powdered earth, often several inches deep, with occasional pools even deeper in the drainages. All the spring rains shape teeth-rattling ruts and wheel-gobbling gullies into the steeps. This calls for fatter tires and mountain bike skills to just get through.

Pushing harder than normal early, I was determined to ride all those nasty steeps that were a hike-a-bike mud fest last year. I even cleaned a deeply gullied drop that had me sliding sideways a year ago. Finding a comfortably hard rhythm, I pull into Checkpoint 1, about 48 miles in a little over 3 1/2 hours. I may pay for this pace later, but I feel good.

I top off fluids, grab a renowned Merrie Quigley "protein ball," or two, thank the volunteers and get back out there. Checkpoint 2 is 40 miles, and many dirt roads, in the distance. The day is fully awake, the sky clear, the sun bright, the wind quiet. Odin beckons. What 'cha got, kid?

What I now have is a strong start to a very good race, if I can keep my rhythm and focus. Over the next several hours, I ride with a host of others, sometimes for a few minutes, sometimes for a few miles. Jeff Bloom, a Lutheran pastor from Lincoln and a fast new friend. Dave Mizzelle of Oklahoma, a compatriot at the Gold Rush Mother Lode a few weeks ago and a fellow survivor of last year's Odin's. Kevin Dogget of Oklahoma, another fellow survivor of last year. Robert Ellis, a single speeder from Missouri and a near finisher last year. Paul Brasby of Team Whitetail from North Platte, another Mother Lode veteran. Marc Pfister, a bicycle frame builder from Colorado and Odin's veteran. All these, and others, helped me steam into Checkpoint 2, 87 miles in under 7 1/2 hours. For me, that's cruising. I'm getting tired, but still feeling good.

It's now early afternoon and down right hot. I douse my head under cold water at the Curtis city park and take a break in the shade. Ahead the hills get longer, but not any less steep or any less rutted or any less powdered. Time to attack the next 46 miles to Checkpoint 3 at Potter's Pasture, a local single track mountain bike trail.

Maybe attack is too strong a word. I'm still racing, still pushing the pace, but the growing heat and the long hours of hard effort conspire to wear me down. The hot, long, steep climbs up Ridge Road, Hansen Hill Road and Government Pocket Road seem endless. The rutted downhills offer little relief. I'm really slowing down. When I finally pull into Checkpoint 3 at mile 133, I'm pretty cooked.

The Team DSG volunteers, with their water, treats, camp chairs and enthusiasm, revitalize me. As I try to visualize the final 36 miles to the finish, a steady stream of riders pull in. Now the energy level spikes, as we encourage each other to bring it home.

A group of six spin out about the same time. It's a great morale boost to ride with others at a time like this and the miles flow again. When we hit a sustained climb, I fall back a bit, but that's okay. I cover over 14 miles in the first hour out of Checkpoint 3 and should finish before dark. The brutal series of long, steep rollers on Gillman Road, at about mile 150, are hard body blows that knock the wind out of my pace. But they do not dampen the spirit. I'm closing in on the finish.

As I time trial the last couple of miles into town, determined to beat the darkness, I see a truck stopped ahead on the road. I soon pass it and wave in response to some kind of shout out. Then the truck pulls around and catches me. "Hey, Craig!" yells out a friendly voice, "Nice race!" It's Randall and Amy Smith of North Platte, who were a big part of my being able to finish the Gold Rush Mother Lode race a few weeks ago. They knew I was out on the course, coming in, and wanted to say hi before driving home. What a treat! That's the gravel clan, taking care of each other. Thanks!

The sun is down, but it's not yet dark, as I float into the Blue Heron Campground to rousing cheers. 180 miles in 15 hours 36 minutes. Well faster than any reasonable expectation. The Greg Gleason inspired strategy of going out hard early had to result in a faster overall time, but it's hard to tell how much. I know that I covered that course on that day as fast I could. And I cut over 5 1/2 hours over the ordeal of last year.

Thanks to Team DSG for all the work putting on this special event. You are creating memories and relationships that are meaningful and lasting. I do not believe that is an overstatement. Thank you.

Finally, a special nod to Jeff Caldwell, a very strong racer who last year broke a derailer less than 10 miles into Odin's, converted to a single speed and caught nearly everyone to finish second. This year, he signed up intent to make another run at the crown. Then his 7 year old daughter asked if she could ride. So, Jeff changed his entry to the shorter course option, a 60 mile ride, and rode it on a tandem with her. Reports were that she was grinning ear to ear at the finish. Nice work, Jeff. Best ride of the day.


Here are the results of the 2015 Odin's Revenge. Despite the hills, heat and wind, the primo road conditions result in a relatively high number of finishers (24 out of 36 starters). 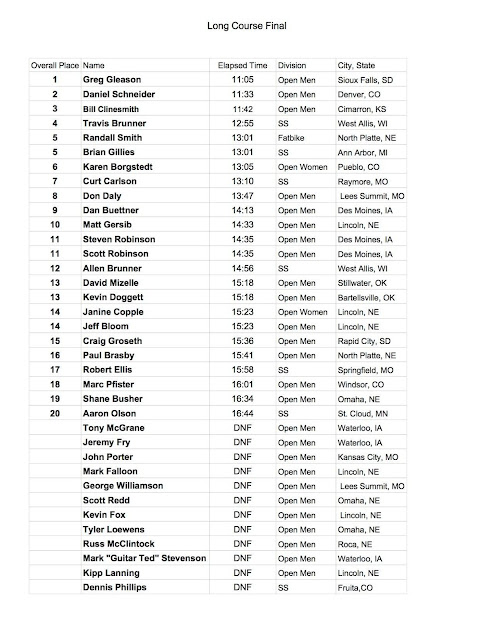 Posted by CrossTrail at 4:54 AM