In June of 2013, I experimented with the midwestern gravel scene at an obscure race called Odin's Revenge that starts on the outskirts of a small farming community in central Nebraska. This experience awakens me to not only the amazing people and places of gravel races, but also to the discovery of riding remote roads year around. It is a game-changer.

Jazzed, I return to Odin's in 2014 with cycling buddy Shaun Arritola, who doesn't need any encouragement for such an endeavor. However, at the Friday evening pre-race gathering, Team DSG delivers heavy body blows to the eager racers. Consistent, torrential rains had pounded the countryside throughout the spring. The primo gravel roads are super saturated, practically unrideable. The greasy dirt roads are deeply eroded, practically unwalkable. Independent of the weather conditions, Team DSG had created a shorter, 60 mile "fun run" route for those not wanting to take on 180 miles. So, they offer the racers of the 180 mile course the opportunity to switch the entire race to the 60 mile course. Not surprisingly, the resounding response is NO!!!

The feisty crowd defies Odin, challenging him to bring it on. Shortly thereafter, the heavens open. It rains hard all night. I feel it, physically and mentally, from the confines of my small tent near the start. I cannot imagine what Team DSG goes through that night.

By the 06:00 start, the rain stops but the skies are not clear. Notwithstanding the bravado at the pre-race gathering, well under half of the expected crowd actually start the 180 mile course that day, at least by my rough reckoning. The rest apparently opt for the shorter route, or for another day. Shaun rides the 60 mile course, which had been his plan all along. Lacking Shaun's wisdom, I start the 180 mile course in a field of 27.

Everyone involved in the 2014 Odin's Revenge carries whispered tales of that day. Sarah Cooper wins the race against all starters, women and men. Less than ten miles in, Jeff Caldwell tosses a broken derailleur, converts to single speed, and catches all but Sarah to finish second by a few minutes. Experienced, acclaimed endurance cyclists Mike Johnson, Dave Mizelle and Kevin Doggett slug it out to finish a little later into the night. A whole host of adventure cyclists ride as far as their bikes and abilities take them. And a team of tireless organizers and volunteers keep it all going. All their stories will be told, and retold, over camp fires and drinks in the years ahead.

I ultimately finish sixth, which is dead last. It's my best race of the year. My best cycling weekend of the year. I'll be back. I will most definitely be back.

For a race report of the 2014 Odin's Revenge by overall winner Sarah Cooper, go to her blog. 2014 Odin's Cooper.

For a race report from frame builder and single speeder Mark Pfister, go to his blog. 2014 Odin's Pfister.

For a local newspaper article and interview with Chad Quigley, go to the North Platte Telegraph. 2014 Odin's - NP Telegraph.

Here's my race report for the 2014 Odin's Revenge, which appeared as a Face Book photo album before I started the Black Hills BackBone blog.

Following my report are the race results from the Odin's Revenge FaceBook page.

We each have our journey on this earth. Part of my journey led me to Odin's Revenge, a 180 mile gravel and dirt road race in Gothenburg, Nebraska. Through the mud and miles, the moments shared with fellow riders and volunteers, the hours alone, and the simple joy of riding a bike through the wonders of creation, I will cherish this experience. Thanks to all who shared this weekend. This album includes a running narrative with each picture. 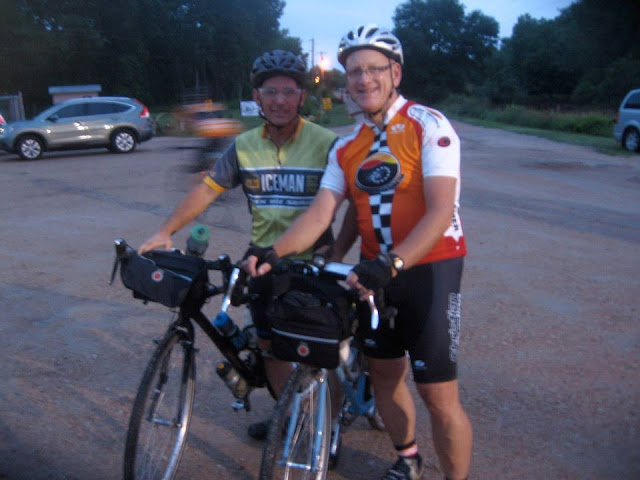 We're all smiles at the 06:00 Odin's Revenge start. Shaun Arritola again demonstrated wisdom beyond his years by opting for the 60 mile "short" course. Me, not so much. It's go time for 180 miles of whatever the day brings. (photo by Scott Redd) — with Shaun Arritola in Gothenburg, Nebraska. 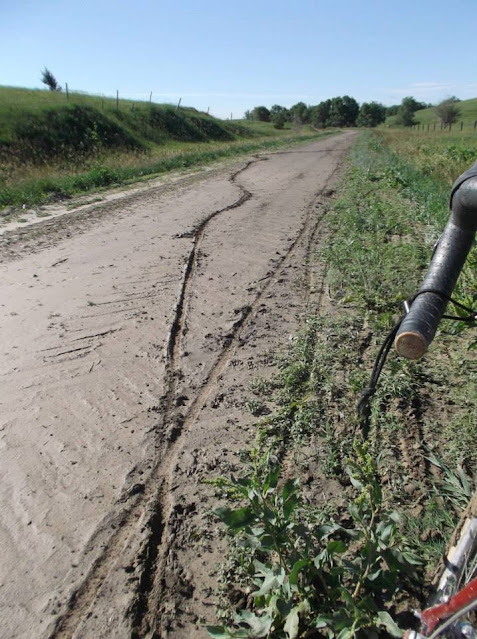 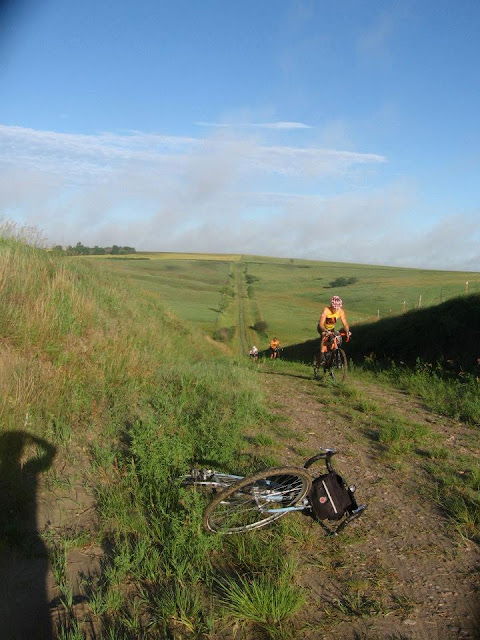 An early dirt road, or "minimum maintenance road," that was actually rideable. Most were ankle deep mud slides with wheel-sucking crevasses. My advanced mass was not an advantage on the slick steeps. — in Gothenburg, Nebraska. 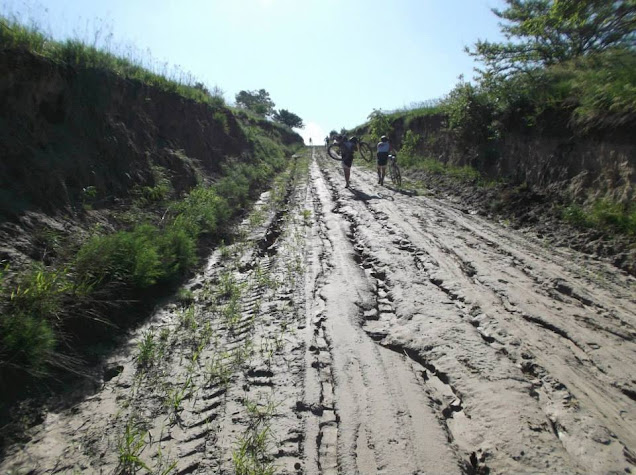 A more typical "minimum maintenance" road prominent throughout the first 30 miles or so. Most walked, or even carried, their bikes up. Whether up or down, I rode less as the miles, and fatigue, accumulated. (photo by Scott Redd) — in Gothenburg, Nebraska. 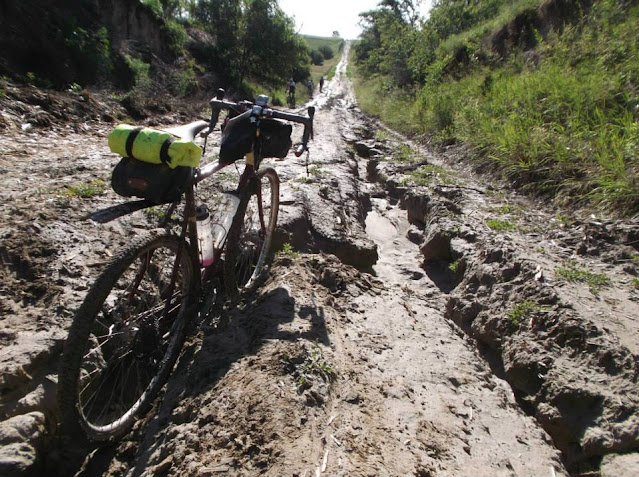 Somewhere at a spot much like this, I was about done. The computer said 29 miles, the clock said 4.5 hours, the body said you're working far too hard this early and the mind said the 87 mile time cutoff was impossible. My spirit said keep moving, but even if the conditions changed radically and immediately, I had neither the strength or the time. (photo by Scott Redd) — in Gothenburg, Nebraska. 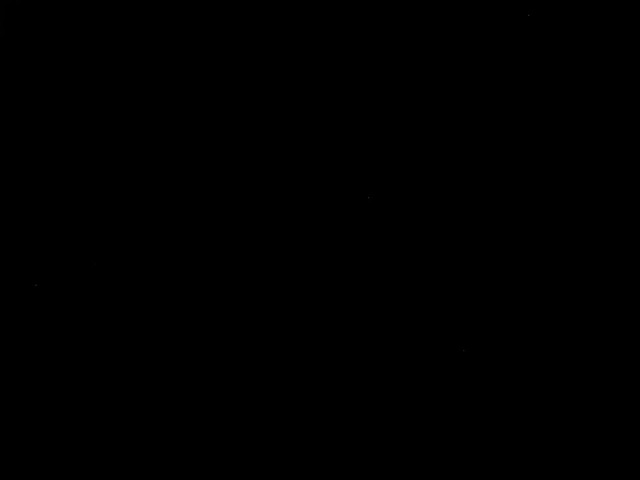 I was done. I closed my eyes. I said, "Lord, my big plans for today are over. I cannot even make the race cutoff time. This day is now for You. I'm sorry for not doing this before, but I'm committing to this now. Whatever You have in mind for me today, I'm all in." A great burden was lifted. I practically pranced up that hill to find what lay ahead. — in Gothenburg, Nebraska. 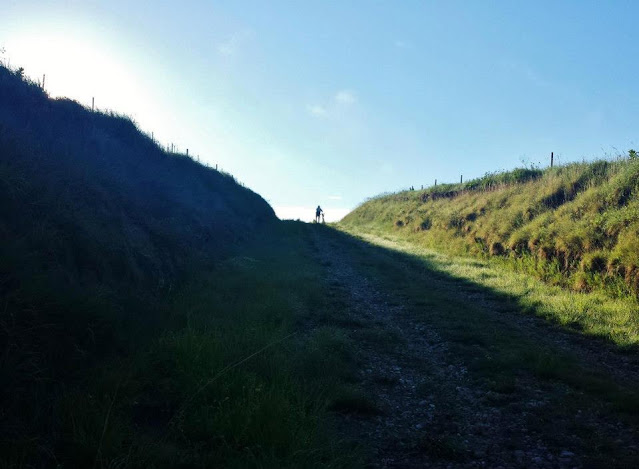 Within a few minutes, I crested that hill. There stood Chad Quigley, one of the race organizers, proclaiming that we had come through the worst, that the sun had poked through the overcast skies and that an unexpected wind had picked up force. Roads were drying quickly. He then added that, due to the conditions, the 87 mile time cutoff was extended 2 hours. Wow. How could I stop now? How could I stop at all? I had His purpose, at least for this day. Ride. Just ride. — in Gothenburg, Nebraska. 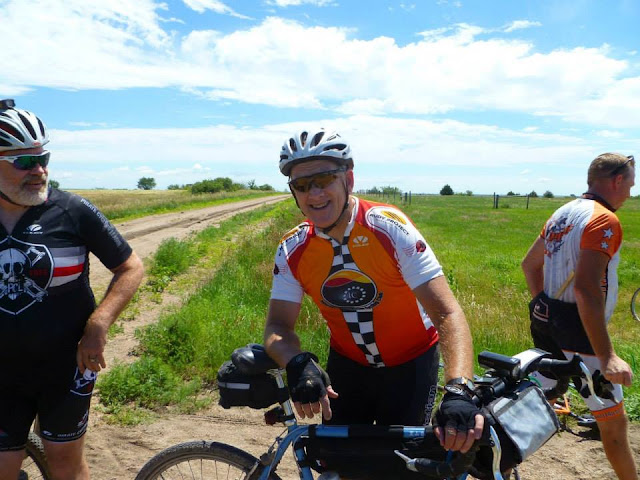 Grateful to finally pull into Check Point 1, I found cyclists sprawled about like a M*A*S*H triage unit. In stark contrast, the ever-smiling, friendly face of Mark Stevenson greeted me and encouraged me, even as he called his race over. Those first 47 miles took me almost 6.5 hours, but I now had the strength and time to continue to hope for making that cutoff. (photo by Merrie Mitchell-Quigley) — with Mark Stevenson in Gothenburg, Nebraska. 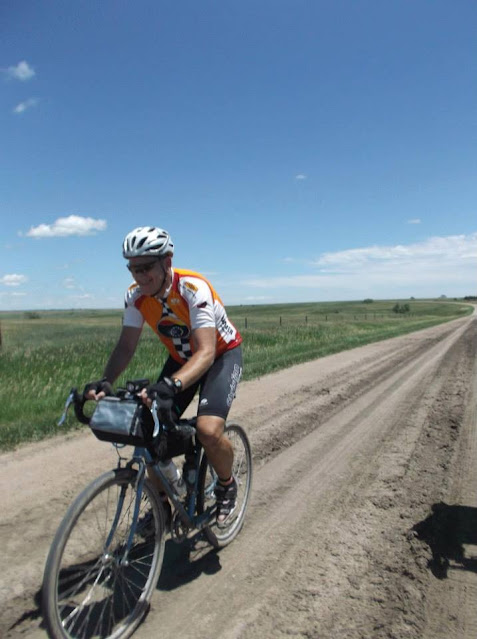 Now, with many of the gravel roads firming up and the worst of the dirt roads behind us, I'm cruising in high spirits. It's well into the afternoon and the 87 mile cutoff is hours away, but riding with purpose is a game-changer. (photo by Scott Redd) — in Gothenburg, Nebraska. 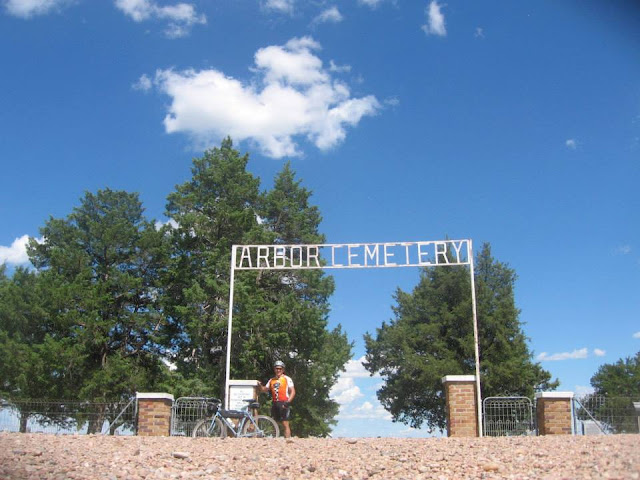 By late afternoon, the sun and wind worked wonders on the roads. The cutoff time was now in reach and hope began to stir for an opportunity to keep riding. I enjoyed riding with Scott Redd during this stretch and even stopped for a cemetery shot to commemorate the winter prairie training rides with Shaun Arritola. — in Gothenburg, Nebraska. 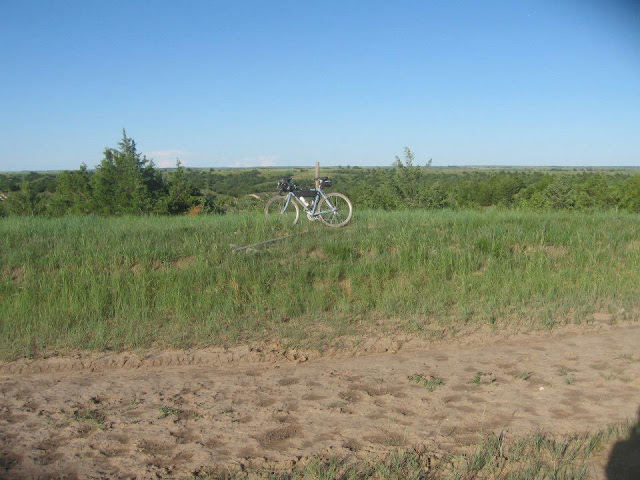 I spun into the 87 mile cutoff with an hour to spare! I'm still able to ride! The next 30 miles or so were some of the best miles I have ever covered on a bike. Early evening on Ridge Road revealed 5 miles of stunning prairie panorama. Some of those miles were less than smooth due to a pockmarked pattern of sun baked cattle hoof prints. But, all told, those early evening hours were filled with the simple joy of pedaling a bike through God's creation. — in Gothenburg, Nebraska. Sunset at Government Pocket Road, yet another "minimum maintenance road" that was a joy to ride, now that it was mostly rideable. When I eventually reached the 137 mile Check Point 3 at Potter's Pasture, the jet black night sky simply burst wide open with stars. I'm sorry that I didn't take pictures of the awesome volunteers along the way. Please know that your efforts were greatly appreciated. — in Gothenburg, Nebraska. 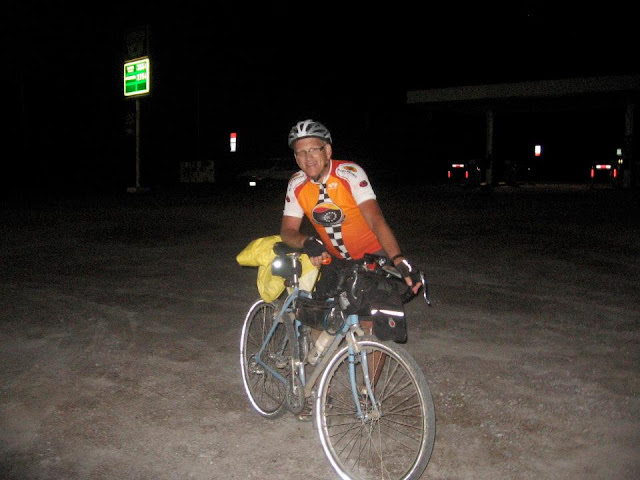 Flying into the finish to the roars of the crowd? Better yet.  Shaun Arritola sets his alarm to wake up to meet me at the finish at 03:00. And he brings a cold bottle of chocolate milk, my go-to emergency energy source and favorite recovery drink. Thanks, so much, Shaun. Turns out I finished both 6th overall and dead last. No way was that possible alone. God bless. — in Gothenburg, Nebraska.


Here are the results of the 2014 Odin's Revenge, where I finished 6th overall, and dead last, out of 27 starters. This field comprised many cyclists with substantial achievements in endurance sports. I am honored just to be a part of it. 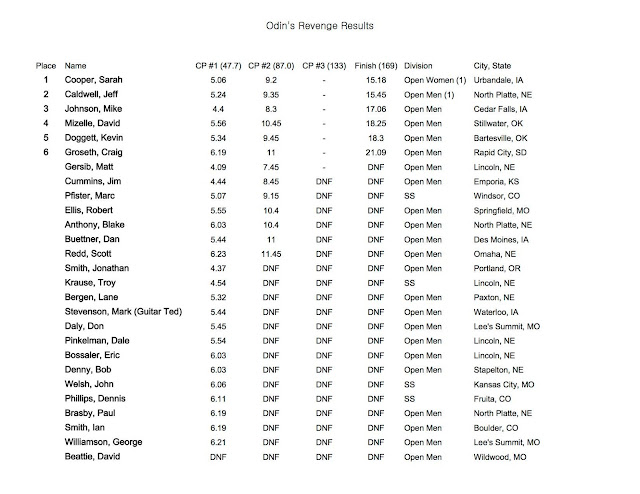 Posted by CrossTrail at 5:29 AM