Seeking to experience a piece of the storied MidWestern gravel scene, I stumble across Odin's Revenge in the spring of 2013. A post card entry foretells the folksy character of the race and the people behind it. The six hour drive to Gothenburg, Nebraska flies by, as I ponder the day ahead.

Knowing nothing about the course but a few pictures, I choose to bring my 1999 Torelli cyclocross single speed, sporting 33 mm knobbie cyclocross tires. Built for sharp turns and rapid accelerations, that quick handling bike is not at all optimal for a 180 mile gravel road race. But no other bike in my stable seems to be better suited. At the pre-race, folks share thoughts about equipment choices for the day ahead. All were welcomed and I hear nothing but encouragement from more experienced racers.

I do make one change from my long standing cyclocross setup. After struggling with the extended, steep climbs late in the race at the Gold Rush a few weeks before, I switch out my cyclocross 42 x 18 gear for a slightly more hill friendly 42 x 20. That is a good decision for the brutal course at Odin's Revenge.

The early start rewards racers with clear skies, cool temperatures and a light breeze. By mid-morning, however, it is mid-summer hot and humid, with a howling wind. Loads of racers drop out at the 100 mile check point at the KOA camp ground. I take a long break there, douse my steaming noggin under cold running water and chug a bottle of chocolate milk.

The next ten miles are a solitary slugfest. A false flat uphill, through thick gravel, into a steady 20+ mph wind in 100 degrees, with not another rider in sight. It is all I could do to ride station-to-station. That is, pedal for one mile to the next intersection on the gravel grid system, gather myself for a moment, and repeat. Finally, the route changes direction and enters more interesting minimum maintenance roads.

Late in the race, I ride up on a small collection of precocious youngsters walking their spiffy geared bikes up a particularly steep and rutted pitch. What? Walking? OK, that dirt road looks nasty enough to just walk, but I choose to help them see the possibilities. With powdered dirt up to the rims and ruts all around, I stay in the saddle to keep traction and drive that single speed up at a painfully ponderous rpm. With a cheerful "Hey!  Howdy!," I maneuver around those walkers and clean that pitch. Here endth the lesson. Maybe that will get those kids back pedaling.

It doesn't take long. The course soon turns back to fast, down wind, gradual downhill primo gravel for a glorious twenty miles to the finish. Sure enough, those guys on their shiny geared bikes fly by, with the greatest of ease, while I furiously spin out that single speed. "Grab my wheel!" shouts one in jest, as he gleefully pulls away. Thanks. I guess I deserve that.

Eventually rolling to the finish, I am exhausted, relieved, overheated, overjoyed, and hooked.

In the way of the gravel scene, I later meet those guys that passed me near the end and share many miles at subsequent events with them, including Omaha JackRabbit Guru Scott Redd and Omaha Bikes visionary Pell Duvall. I believe that fellow endurance cyclists Lane Bergen, Paul Brasby and Mike Wagster also conspired in the schooling of that single speeder. So glad to have met them. All strong riders and great companions, on and off the course.

For a race report of the 2013 Odin's Revenge by women's winner Elizabeth Reinkordt, go to her blog. 2013 Odin's Grindcore.

For a race report by one of the overall winners, Corey "Corn Bread" Godfrey, go to his blog. 2013 Odin's - Corn Bread.

For a race report by gravel veteran Matt Gersib, go to his blog. 2013 Odin's MG.

For photographs galore of the 2013 Odin's Revenge, go to Scott Redd's photo album on his FaceBook page. 2013 Odin's Scott.

I did not write a race report back in 2013. The following is a reproduction of my blog post about the impact of that 2013 race, published in December 2015 as part of a series entitled "A Journey to Gravel Races."

Riding the inaugural Black Hills Gold Rush introduces me not only to the adventure of gravel races, but to the colorful assortment of cyclists drawn to them. Yearning for more, I sift through the storied MidWestern gravel scene to unearth Odin's Revenge, a second year race smack dab in the middle of Cornhusker country. What a gem.

Odin's Revenge is the brainchild of a motley group of local Gothenburg cyclists known as Team DSG, an acronym with a story for them to tell. The prior year, 28 cyclists embarked on an unmarked, unsupported course of 180 rough, hilly miles through remote backcountry in the heat of summer. Six finished. There's a challenge. And the vibe feels legit. Post card entry mailed.

Mid-afternoon Friday, I pull into the campground serving as the start/finish/gathering place and immediately see that the people here make the race special. The proprietors are immigrants from Great Britain, bringing a fun, friendly mix of sights, sounds and tastes of the British Isles to middle America. Even with their campground bustling with typical mid-summer tourists, Gwen and Barry cheerfully carve out some space to stage a Friday evening pre-race gathering, as well as a Start/Finish area. Off to a rousing start.

Setting up my little tent, I watch a steady stream of vehicles pull into the campground, many sporting bikes on board. Before long, a small community forms, as folks set up camp, wander around to other camps, and strike up conversations. Cyclists of all kinds are here, allured by the challenge of an unknown course through unknown country under unknown conditions, with only a simple set of written directions to follow, the gear on your bike and your own gumption. The air is electric, as we compare thoughts and hopes.

Wandering over to the pre-race meeting, we find an enthusiastic group gathering, with local musician Paul Siebert playing a variety of instruments and Mark Stevenson himself, Guitar Ted of TransIowa and Gravel Grinder News fame, joining in. Microbrews and other sports drinks flow, as folks meet and reconnect. Eventually, Chad Quigley and Matt Bergen of Team DSG describe the course, walk through opportunities for water and supplies, explain emergency and bail out procedures, identify check points, point out particular highlights and hazards, and answer questions. The evening is ripe with anticipation.


The predawn glow on the eastern horizon hints of the glorious morning to come, as a primed peloton of 40 or so pedals out of town for a couple of neutral miles on pavement before the gravel, and the racing, starts. Soft, muted sunlight reveals a stunning landscape of rolling hills. Wow.

There are no strangers in this peloton, only kindred spirits now connecting. I enjoy the company of many, but seem to leap frog repeatedly with Mark Stevenson, grizzled old timer of the gravel scene. He's the real deal. Even to this new comer, he is genuine, encouraging, open, and chatty to the point of loquacious. It's a real treat to share some early miles with him.

As the miles pass, the small field stretches and I ride more by myself. But my sporadic encounters with fellow racers are consistently positive and upbeat, as we crank through the rough, hilly roads in the growing wind and heat of the day. The cheerful check point volunteers add to the festive vibe, offering encouragement, along with cool water and homemade treats. I'm loving everything about this.

After about 13 1/2 hours of remote road bliss, I spin into the finish to the boisterous cheers of the gravel clan reassembling at the campground. That's good for second place amongst the single speeders, out of four starters. More importantly, that's a great day on the bike. Ahead lies a relaxing evening around the campsite, sharing stories of the day.

What an experience. I'll do this again.

Here are the results for the 2013 Odin's Revenge, where I shared an amazing experience with a bunch of new friends. I knew I'd be back. 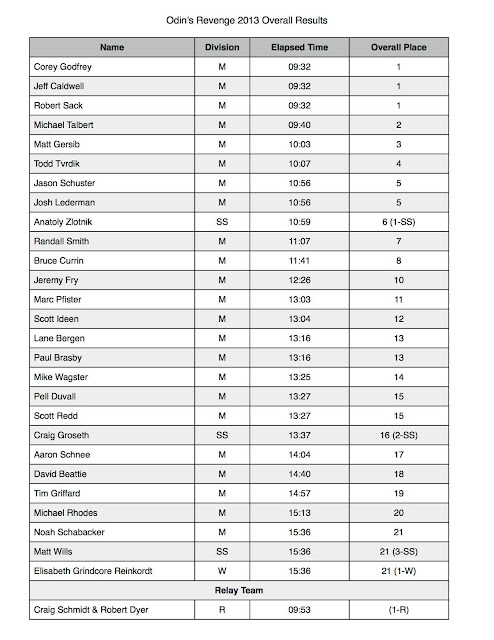 Posted by CrossTrail at 9:00 PM