Black Hills BackBone - It's Still Out There

It's out there, somewhere, calling your name.

A thought that passes, yet never seems to pass away.

A word, unspoken, waiting for the right moment that never arrives.

A vision, clear and fleeting as a prairie sunrise, that surfaces at random. 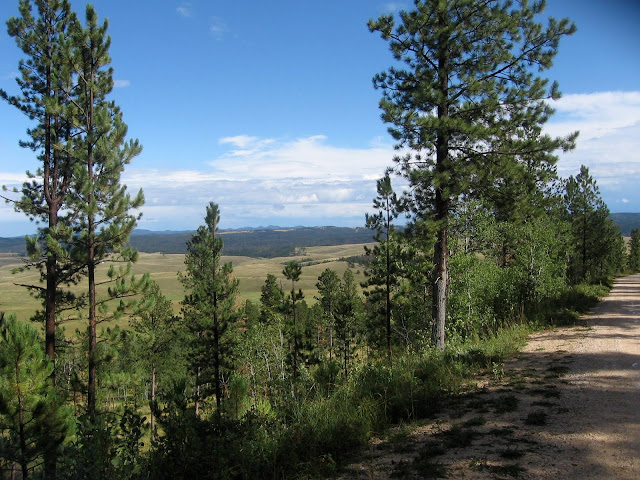 Two years ago, I dreamt up the odd idea of a riding gravel and dirt roads across the state of South Dakota.  Not West-to-East, as many think of a cross-state ride, but rather North-to-South on some of the most remote roads around these parts.  Immersed in the prairie.  Deep in the Hills.  Out there.

This idea started at the North Dakota border with over 130 miles of open prairie, climbed into and through the Black Hills for 125 miles, and dropped back to the prairie for a final 55 miles to the Nebraska border.   It's so remote that there may well be more miles without cell coverage than with.  The first 200+ miles offer a single convenience store/bar and enter just one town.  Since the envisioned route traversed the spine of the Black Hills, I christened it The Black Hills BackBone and set out to scout it, map it, and eventually ride it.

It's still out there.

Oh, I've scouted it, mapped it and photographed it.  It's documented all over this blog.  I've even ridden every mile of that route, at one time or another.  Some more than a few times.  But still not the entire route in a single ride.

That is not from lack of preparation or effort.  Here is the post of my first attempt in 2015, when I stumbled into a ferocious prairie wind with horizontal rain that eventually spit me out in Spearfish, barely able to stand.  A Rancher's Kindness.  And here is the post in 2016 of my second attempt, when I rode into a freaky snow and ice blizzard climbing O'Neil Pass, shaking in a trail head shelter like a frozen leaf.  A Sudden Turn.  My third attempt is still undocumented.  I'm still processing it.  It may be awhile.

This route is a beast.  It will take more than a little conditioning, preparation, experience and good fortune to successfully cover those 300+ miles.  Certainly more than I've brought so far.  I don't know if I ever will make it, but I will try again.


Addendum.  The Black Hills BackBone route is posted, with lots of details and pictures, if you're looking for a nice, long ride.  To save a trip through the blog archives, here are links to prior blog posts for the route.  Introduction;  Overview;  Final Cut;  Digital Map;  Cue Sheets.

Posted by CrossTrail at 6:11 AM