The Cloud Peak 500 is a 500 mile remote road loop in and around the Big Horn Mountains of Wyoming. This post is part of a series that describes some of each day's logistics involved when we rode the route on bicycles loaded for a 7-8 day self-supported tour in early August 2020. It also includes a screen shot and link to a digital map on ridewithgps.com, which I created after the trip to show our ride for each separate day. Finally, it adds a photo gallery. This post covers Miles 52-104 of the route, which was our Day 2. Go to Miles 0-52 for Logistics for Miles 0-52 (Day 1).

We start Day 2 from USFS Ranger Creek Campground at Mile 52 at an elevation of about 7,700 feet. The route continues climbing Red Grade Road (26) about 11 miles to over 9,300 feet at Mile 63. Relative to the climb from Big Horn, the gradient is significantly less and the road surface is consistently good. The route winds through forested hills with occasional views of big peaks. It then drops about 1,000 feet over the next 10 miles to about 8,300 feet at Mile 73, all on good gravel. If you need water or an outhouse, stop at USFS Dead Swede Campground at about Mile 72. There's a small incline before dropping quickly on good gravel and then generally downhill pavement on U.S. Highway 14 to Burgess Junction at about Mile 82. This is a very nice 30 mile stretch of remote mountain roads. 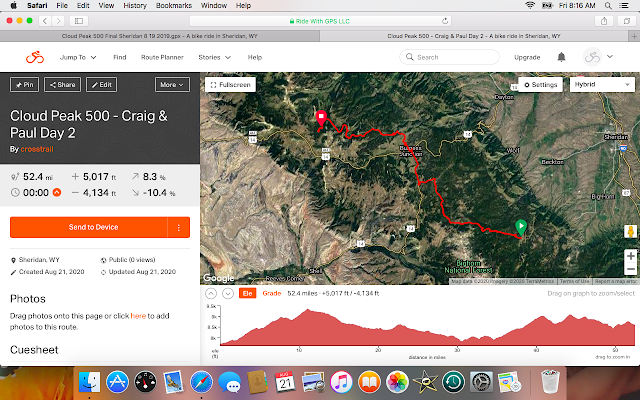 From Burgess Junction at Mile 82, look to the west to see Bear Lodge Resort. This is the last commercial establishment until the town of Shell at about Mile 139. We stopped for water and a long lunch break of burgers, fries and Cokes. Good, solid short order food. Paul also recharged batteries and electrical devices.

Back on the bike, the route turns north for about 5 miles of rolling gravel through treeless hills and then climbs steadily for the about 6 miles to gain another 1,200 feet. The gravel is good, but the climb is relentless and exposed to the elements, with exceptionally long sight lines and views. A short descent leads to a steeper 2 mile climb to Kane Cow Camp at about Mile 96 and the afternoon's high elevation of about 9,100 feet. No cowboys were at the camp when we were there on Thursday, August 6, 2020, but it was set up for a large operation that appeared to be happening soon.

The following 6 miles or so primarily descend on good gravel through trees. Both the descent and the trees are a pleasant change. The route then climbs gradually along a valley, with many places to disperse camp in and out of trees. We camped at a great spot at about Mile 104. 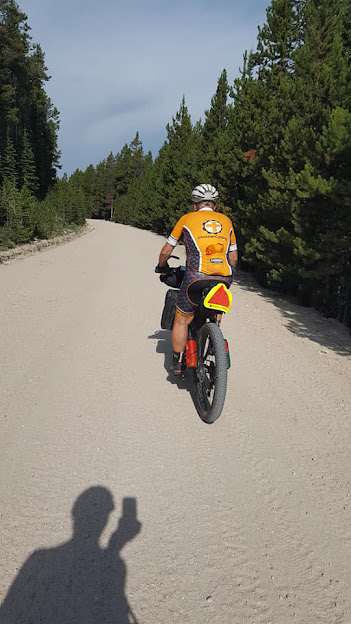 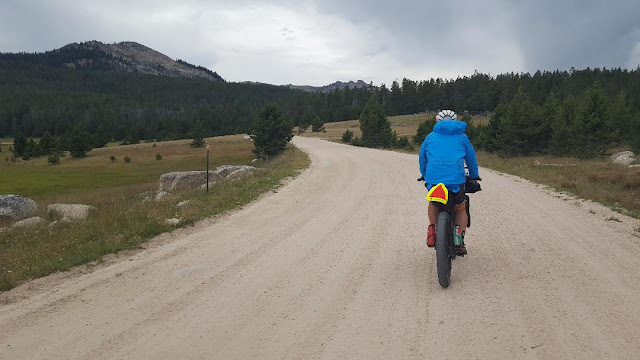 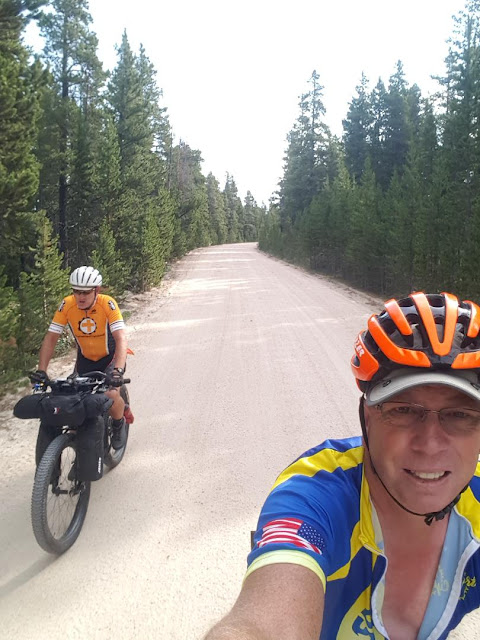 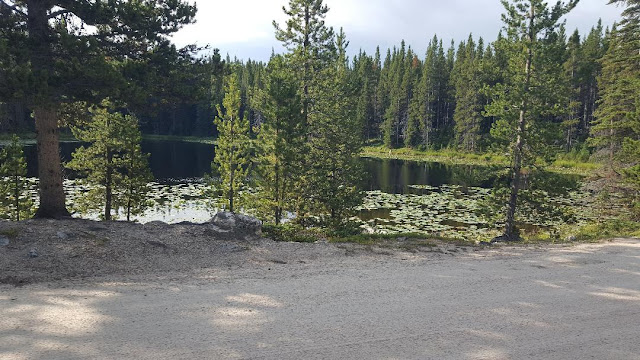 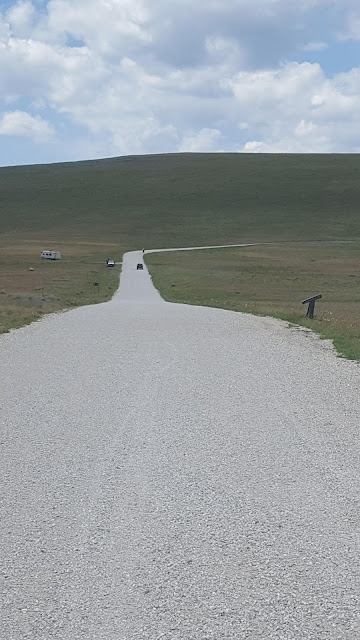 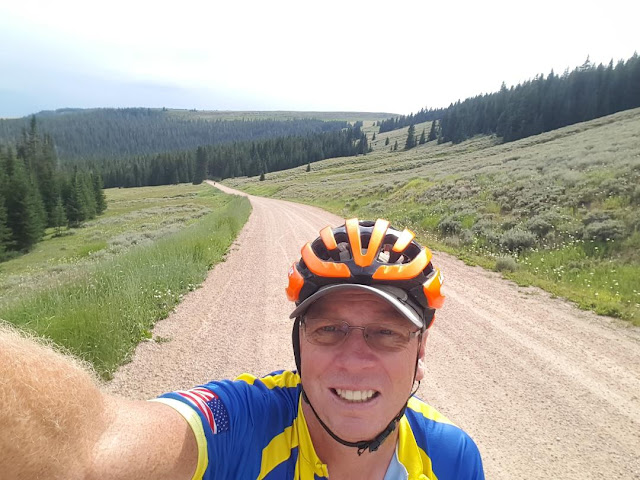 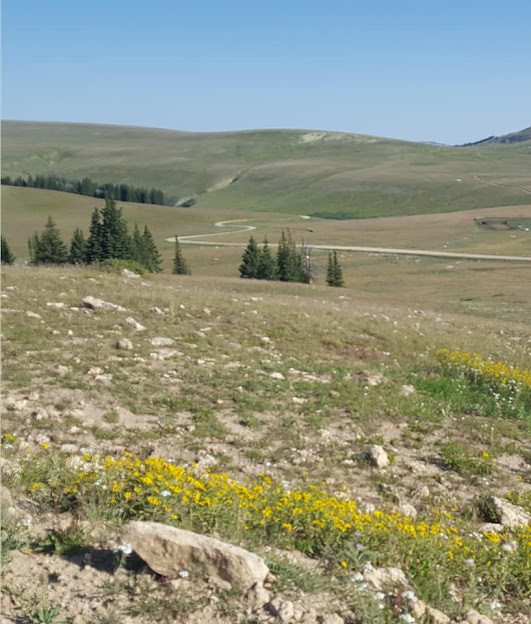 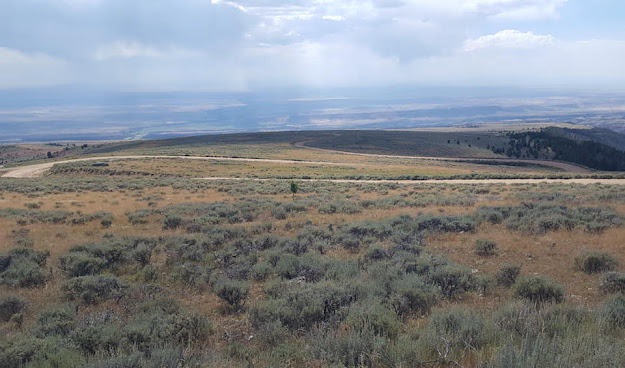 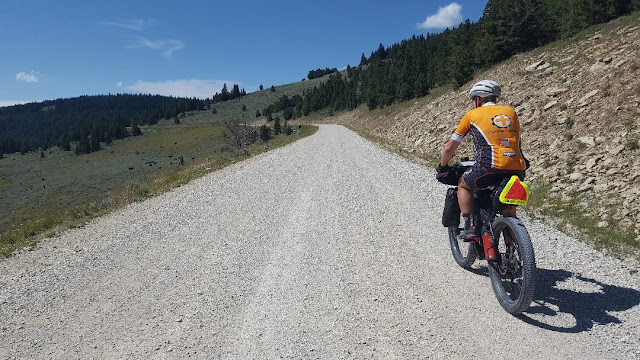 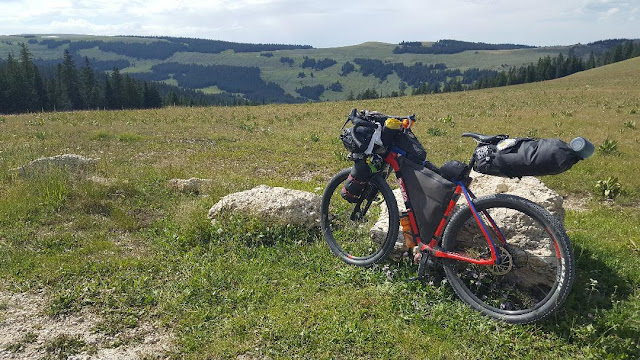 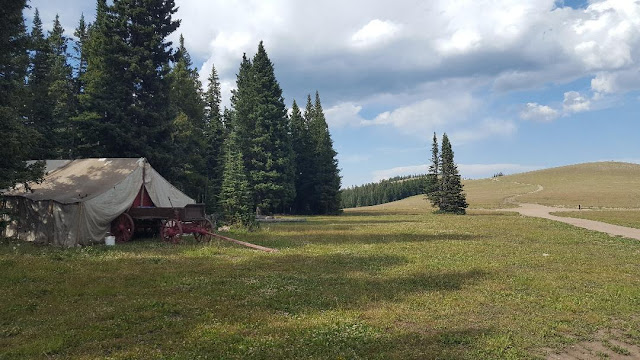 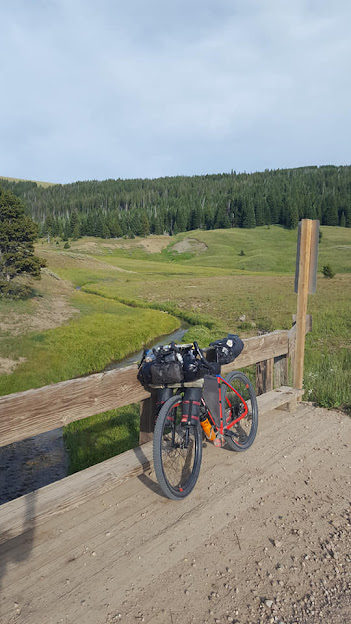 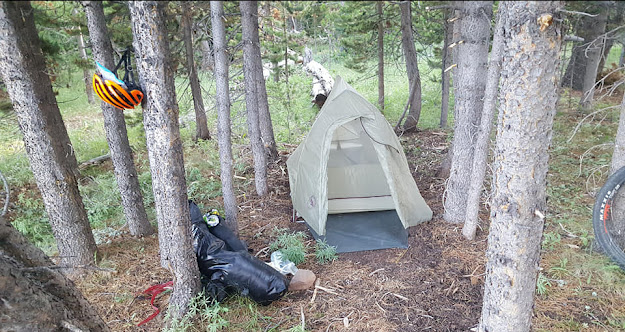 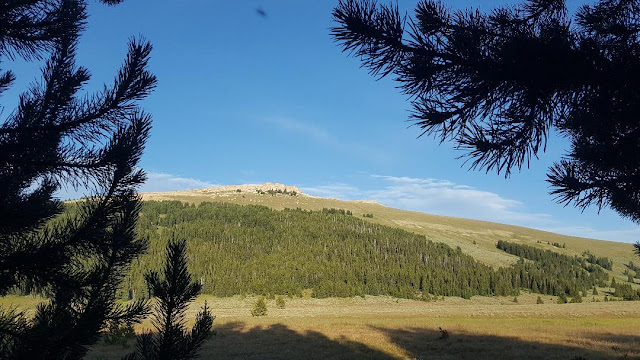 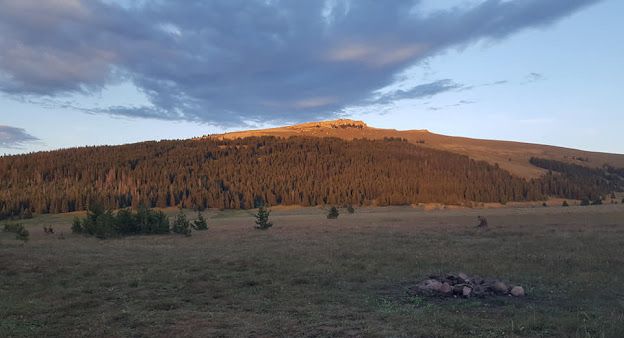 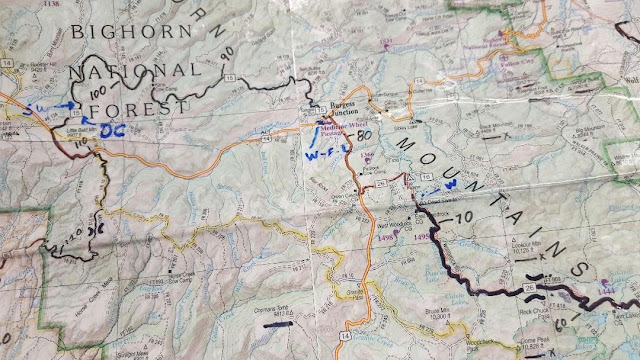 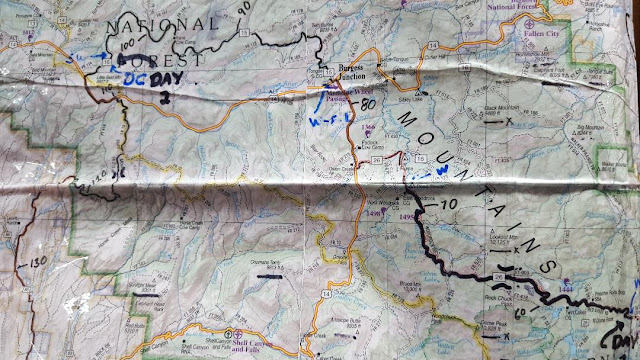 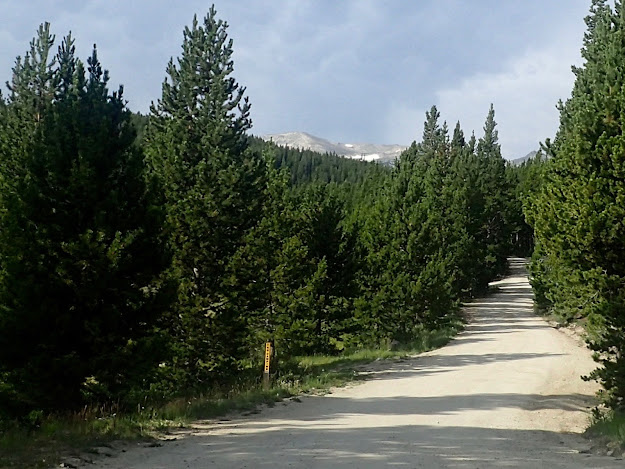 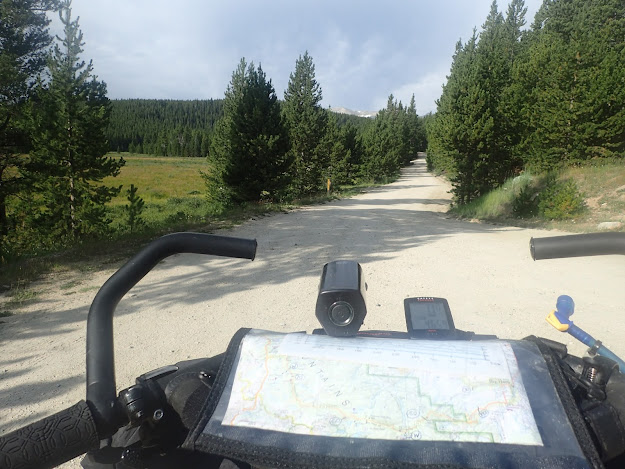 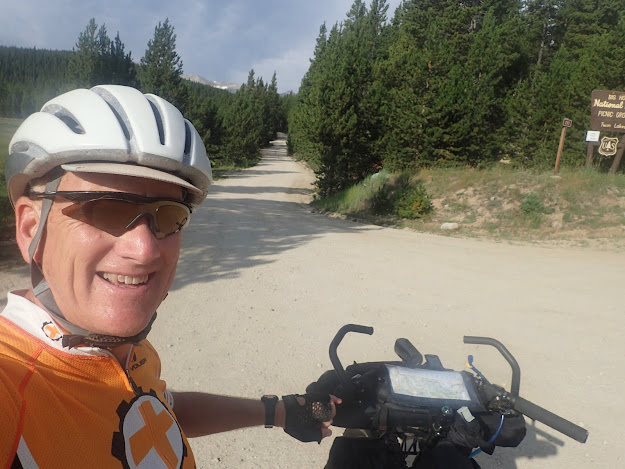 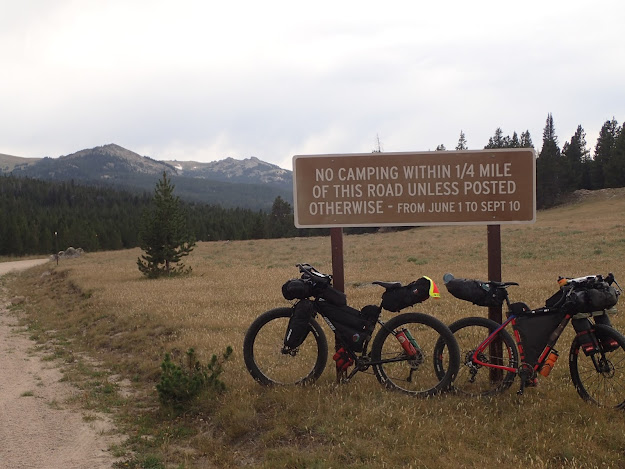 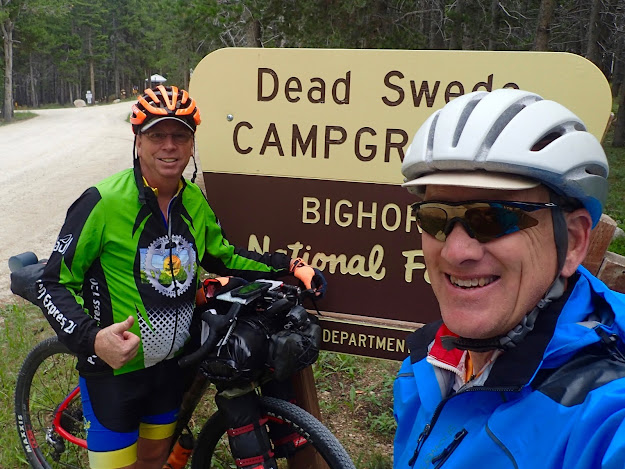 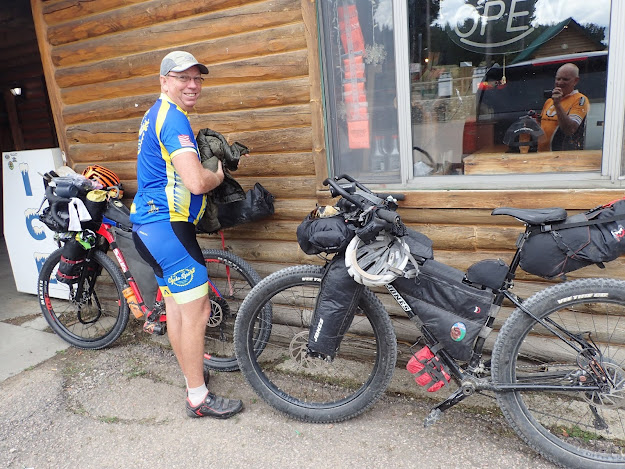 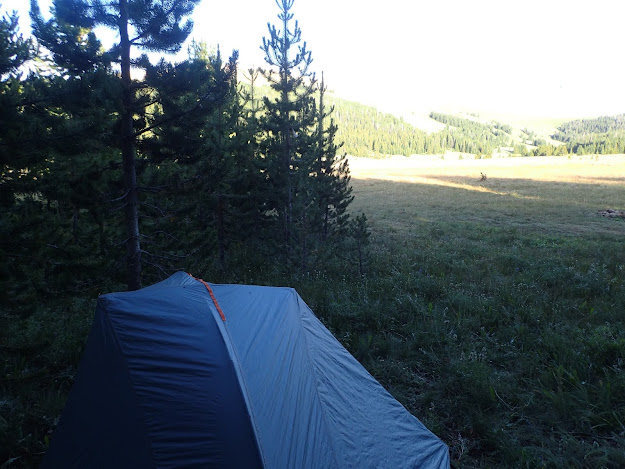 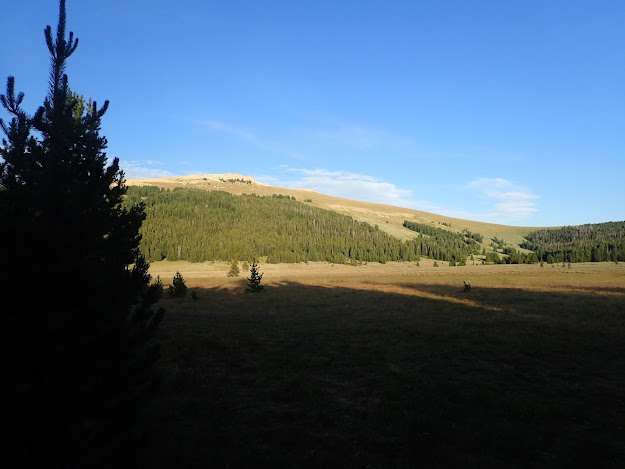 Posted by CrossTrail at 8:00 AM