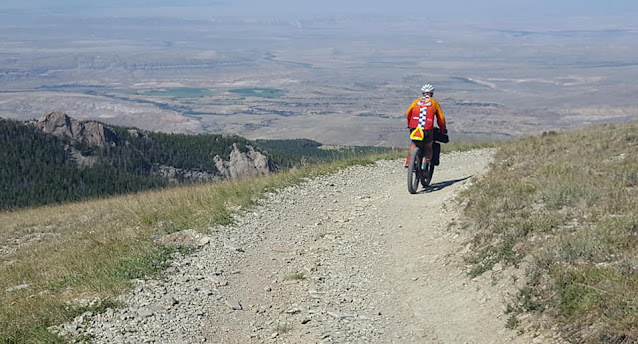 Descending "Dude's Downhill" (USFS 213) toward the town of Shell far below.
(photo by Paul Brasby)
After yesterday's re-affirming ride and relaxing evening, I awaken before dawn, jazzed for another day on the Cloud Peak 500. I am thankful for yesterday, the company of a patient friend, and the opportunity to ride another day.

While packing in the diffused early light, we gaze across a mountainside meadow to spot a large herd of elk emerge from a shadowy draw. We enjoyed their chorus of bugling throughout the night and now pause to watch them meander to higher ground. They move slowly, as a herd, to graze. More and more keep drifting out of that draw, soon numbering in the hundreds. As we watch in wonder, they slip into the forest. What a cool start to the day. We christen the camp site "Elk Meadows." 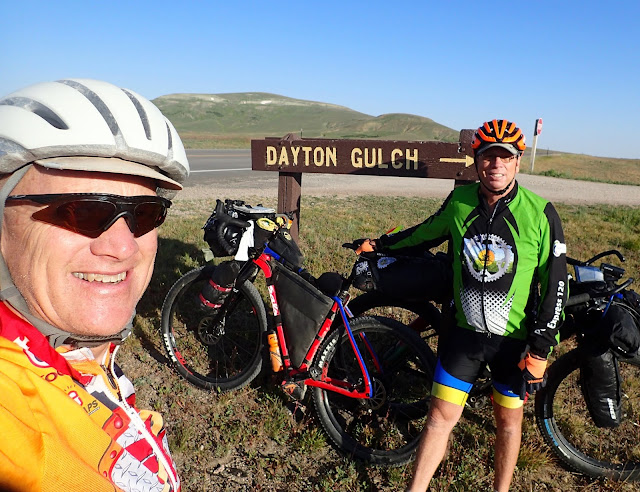 Climbing above treeline to U.S. Highway 14A early on Day 3.
We reluctantly leave Elk Meadows and spin up USFS 15 to paved U.S. Highway 14A for some big views all around. These high altitude grasslands are summer home to domestic sheep, their guardian sheep dogs, and shepherds with their wagons. It's also the year around home for native marmots, the heaviest members of the squirrel family, who duck around, over or under rocks with surprising quickness.
Turning off pavement onto primitive USFS 10, we immediately start climbing again. As the rough gravel road winds through high pastures, it seems built for occasional, slow moving traffic, such as the sheep herders. Bike packers, too, I suppose. As USFS 10 turns to drop to the east, we take a steep, rutted pitch up primitive Hunt Mountain Road (USFS 213), which tops out at a craggy plateau with breathtaking views to the west. 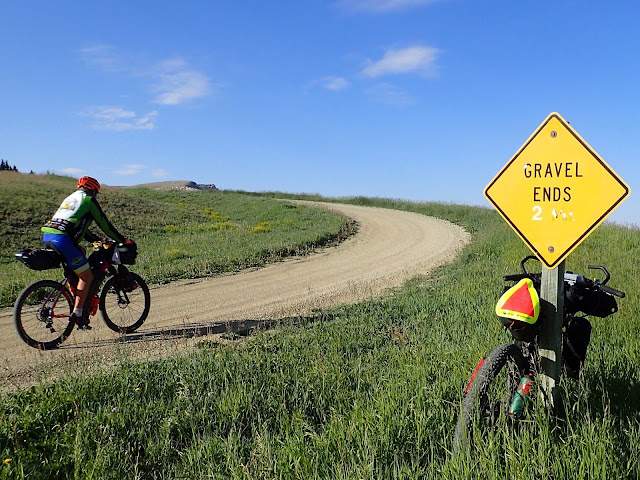 Lightly sprinkled gravel turns to dirt and rock as we approach the summit of this climb.
It's a great time and a great spot for a break. At over 10,000 feet, this is the highest elevation of the Cloud Peak 500 route. The 360 degree views span miles upon miles to a hazy horizon. We take some time to soak it in. Paul even rides out to a rocky crag for a postcard picture for some semblance of scale. It's a special place that very few others likely have experienced. It's worth the trip, all by itself.
From here, the route profile shows a steep descent to the prairie below and then a gradual descent to the town of Shell at Mile 139. By now, we know not to trust that general profile, which already has failed to show some significant elevation changes, both up and down, and reveals nothing of the road surface. But we also know that Shell lies almost 6,000 feet below us and that we already have completed most of our climbing for today. That's a good feeling to have in the morning. 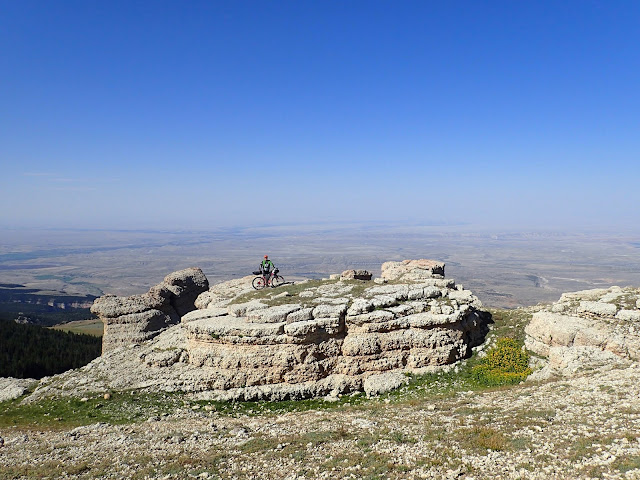 Paul takes his post on the citadel of Hunt Mountain.
We hop back on USFS 213, a primitive Forest Service road that may be passable in a suitable 4x4 with a skilled driver. From this rocky plateau, it rolls along just far enough for us to pick up some speed to hurl down the steepest, rockiest, loosest, twistiest downhill this side of the X-Games. And, at 8 miles long, it's not short. Oh, some stretches flow a short while, but often just enough to build speed to bounce through the next rock garden, plow into the next sand pit, or overcook the next hairpin turn. Maybe all at the same time. This is full-on gonzo downhill mountain bike territory that drops over 4,000 feet in short order.
I call it "Dude's Downhill." That's either a contraction or a possessive noun, take your pick. That is, it can be a contraction of "That Dude Is Downhill," as a statement of unsurpassed understatement. Or, it can be the possessive downhill of a gonzo dude, as in that's his downhill. Maybe both. Probably both. 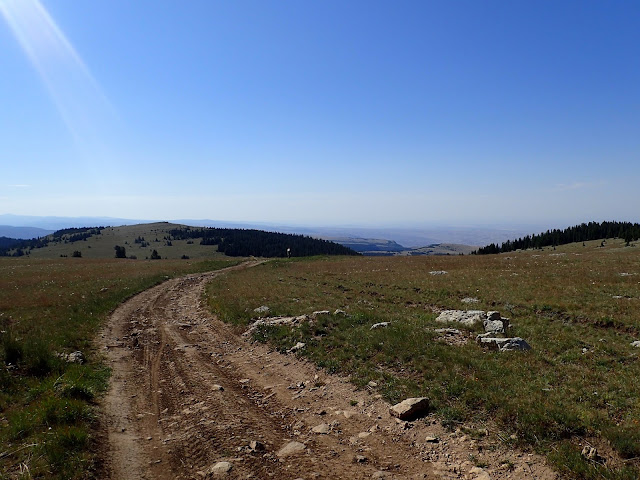 The dirt road is about to drop out from beneath us. 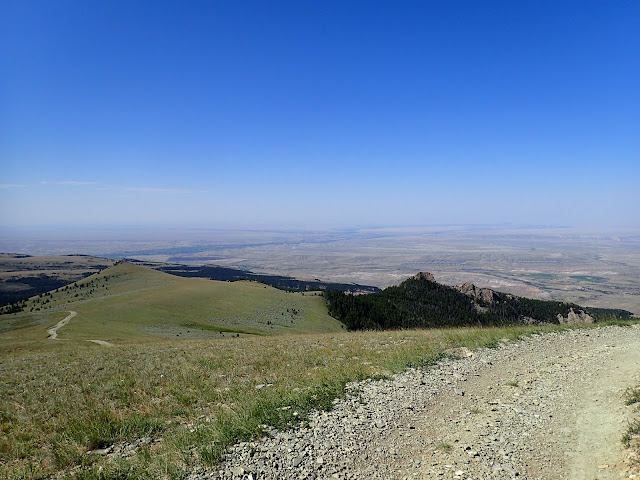 The start of Dude's Downhill looks innocent enough.
Dude's Downhill rolls quickly down a rocky ridgeline with views plummeting all around. While moving on this rough road, however, it's hard to enjoy the scenery and it's hard on the body. So, I stop frequently to take in the views and to recover.
As I start to get comfortable bouncing along uncomfortably, the road drops straight down into a series of rutted, rocky, loose hairpin turns. More than once, I skid around a turn almost to a stop, just to stay on the "road." For me, it's a white knuckle descent and far too much work, especially for the price we paid to gain all that elevation.
Finally descending into the forest, the road changes, repeatedly and unpredictably. Hard scrabble gravel  drops into a loosey-goosey steep that levels to smooth, straight, soft doubletrack, which turns to rutted, pot-holed dirt, and then abruptly jolts up a short, rocky, uphill steep. It's a crazy mix of mayhem, requiring focused attention and checked speeds. Definitely not a relaxing cruise. 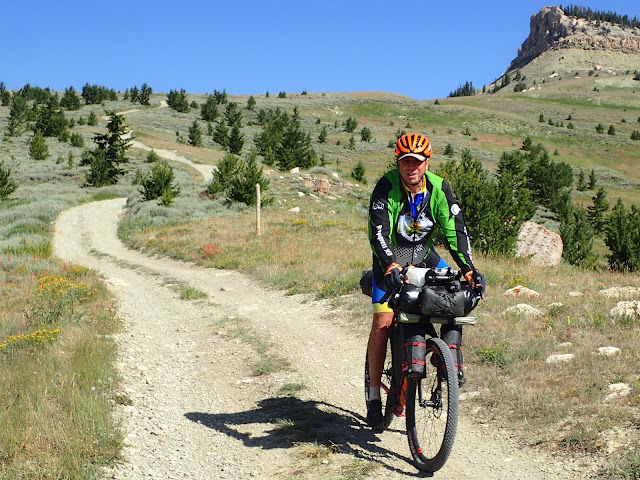 Paul flies down a smooth stretch of Dude's Downhill.
Eventually, I manage Dude's Downhill on my loaded Jones mountain bike, with 3.25 inch Vee BullDozer knobby tires, but not without time, focus and difficulty. Paul also manages it without serious incident on his Salsa Cutthroat with 2.2 inch mountain bike tires. However, this is one stretch of the Cloud Peak 500 where a Jones 29+ mountain bike held a clear advantage over a drop bar Salsa Cutthroat.
We're relieved to start and finish this road relatively early in the day and without damage to bodies and bikes. I would not wish to ride this at the end of the day when tired and certainly not in the dark. 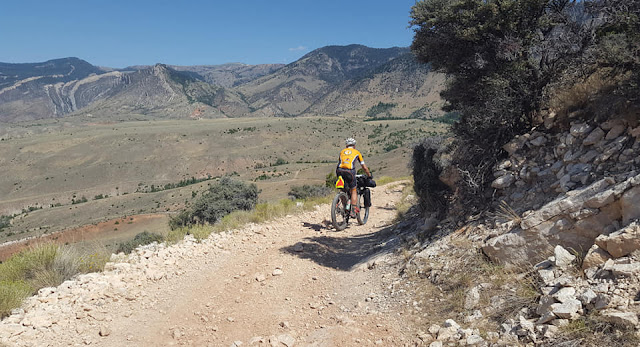 Wondering what's next, Craig rounds another corner on Dude's Downhill.
(photo by Paul Brasby)
Back on firm and fast gravel on Road 85, we cruise primarily downhill along a narrow green band of irrigated ranch land surrounded by hulking hills of brown earth and sagebrush. For the first time since Big Horn, we roll past an occasional ranch house and spot some new construction. And, like in Big Horn, we're back into the heat. We spin into Shell for a break.
We beeline to the Shell Store, recently renovated and re-opened as a general store and restaurant. Once again, we replenish with big burgers, fries and multiple Cokes. Again, Paul adds a salad, restocks snacks and charges batteries. I don't miss the chance for ice cream. Later, we douse everything in cold water from a pump out back and chill in the air conditioned bistro. We love this place and the folks working here. 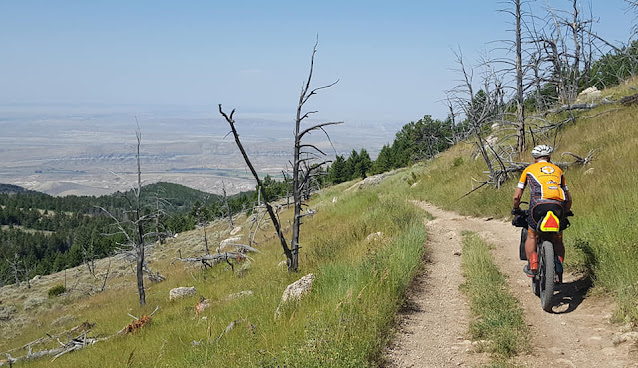 Craig prepares to re-enter the forest to ride whatever lies ahead.
(photo by Paul Brasby)
After a second straight day enjoying a well-timed and well-executed lunch break, we're back on the road heading toward the Red Gulch/Alkali National Backcountry Byway. We start with a rare stretch of pavement, about 5 miles on U.S. Highway 14 to Reeve's Corner, where the route turns south on dirt.
Near this intersection, the Bureau of Land Management built a small covered display describing the storied road ahead and the land it passes through. Signs warn of the rough, rutted, remote road that is "hazardous if traveled by the unprepared" and that no services of any kind are available for the 32 miles of this National Backcountry Byway. Another sign adds that no travel is advised when wet.
Believe it. 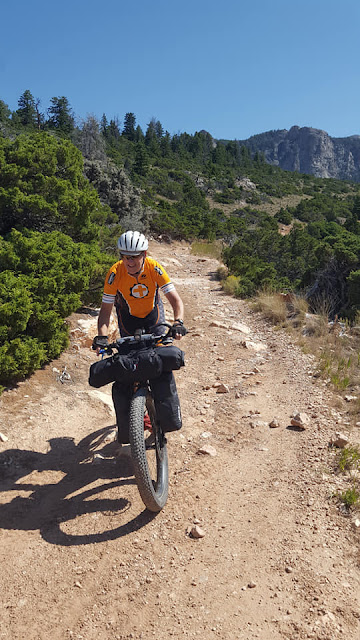 A brief afternoon hail storm strikes as I'm reading those signs. We've seen some rain every day, usually starting around 4:00 pm and lasting less than half an hour. I wait for it to end and then start on that dirt road. Like the sign warned, the clay-like mud stops all wheel movement within 50 feet. I retreat to the pavement, clean mud from everything, and wait some more.

Water doesn't last long in these parts. Within about 20 minutes, the heat and wind take care of most of the puddles. Time to try again. In the first mile or so, my tires pick up some mud, but not enough to clog. A couple of miles later, a fast, dry downhill wipes clear the remaining mud from the tread. Now, I'm flying. The firmed up dirt road now rolls better than before the rain. 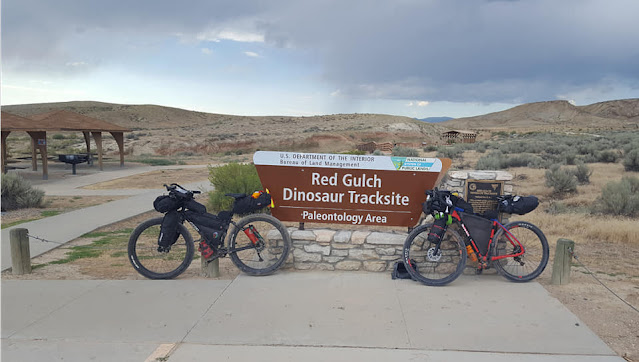 End of Day 3 at the "Dino Tracks."
(photo by Paul Brasby)

The afternoon storm also cools temperatures a little and I comfortably roll the 5 miles to the Red Gulch Dinosaur Tracksite. Here, the Bureau of Land Management built a nice exhibit to showcase dinosaur tracks preserved in rock now exposed. I stop to read the material and walk right down to the tracks. To think that a dinosaur walked right here and left tracks in the mud that still show today. Hmmn. We each may be leaving our own impressions that we cannot imagine.

I return to my bike and pull out maps. On that road, in those conditions, with the relatively less difficult riding day so far, I definitely could ride several more hours today. To do so would certainly mean a dry, dispersed camp somewhere along this remote road in the middle of sagebrush country. Nothing wrong with that. Dispersed camping last night led us to the enchanting Elk Meadows.

However, the Dino Tracks exhibit features covered shelters, picnic tables, an outhouse and plenty of flat space. Tonight, we decide to lounge in luxury by staying here.

Posted by CrossTrail at 6:26 AM