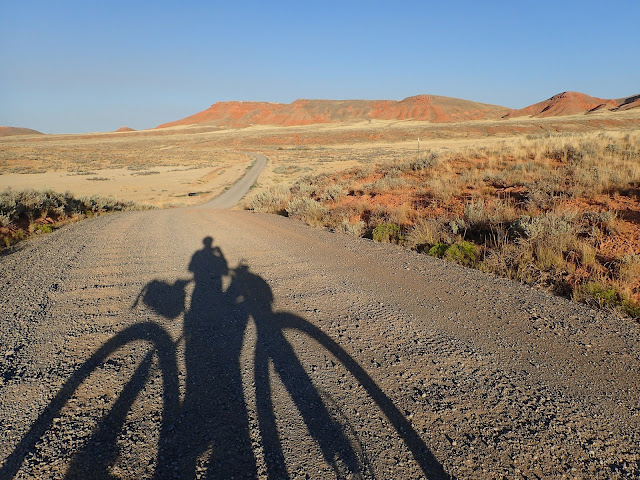 Looking back at a short descent on that distant hill as I continue the long climb up Red Gulch Road.

In any event, today we aim to reach the Medicine Lodge State Archaeological Site, which features a 750 foot long sandstone cliff with hundreds of prehistoric petroglyphs (carvings) and pictographs (paintings). This is a must-stop for me. Moreover, I am determined to arrive with sufficient time and energy to enjoy this art gallery of prehistoric life. An early arrival also may help secure a site at the popular Wyoming state campground on site. 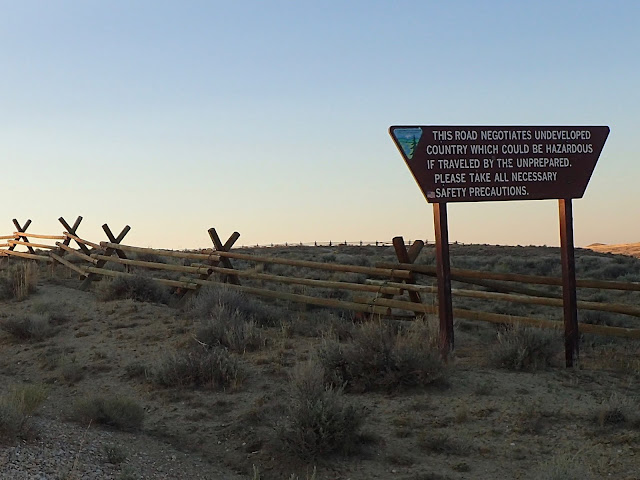 Believe it. It's rough, rutted, gullied, loose, dry, remote, undeveloped, unoccupied, exposed.
And do not try to travel on this road when it's wet.
The 50 mile distance to the Archaeological Site certainly sounds reasonable, although the 6,000+ feet of elevation gain catches my attention. No matter. Those numbers on paper are nothing but a starting point for the real test of the road: road surface, gradient, heat, wind, water, and of course the unknowns.
I take another look at the map. From the Dinosaur Tracksite, Red Gulch Road climbs 3,000 feet in about 16 miles to T-bone into Alkali Road. There, the Cloud Peak 500 route turns north on Alkali Road to climb another 3,000 feet in about 20 miles before finally descending to the Archaeological Site.
There is an alternative. I could instead turn south on Alkali Road, ride almost all downhill from there to Hyattville, and backtrack a few miles to the Archaeological Site. That would cut maybe 15 miles off the route and a whole lot of climbing. More importantly, that may be a way to arrive on site in time to enjoy it. I'll decide my route when I get to that intersection. 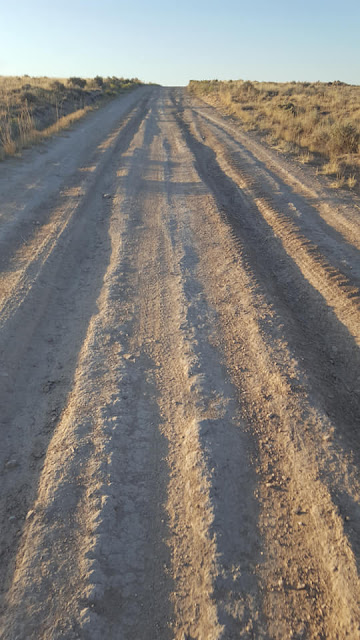 Where the dirt road is packed a bit, it gets rutted and gullied.
And it still goes up. (photo by Paul Brasby)
Back on the road, Red Gulch Road delivers on the promises of the warning signs back at the pavement. It is a rough, rutted, gullied dirt road, often with a soft, powdery surface. And it's on a mission to climb up to those distant, tree covered mountains. It's consistently the steepest grade since Red Grade Road on Day 1.
In addition to the gradient and length of the initial climb, the firming effects of yesterday's rain long since evaporated, returning the primitive road to its dusty, powdery nature. Even my 3.25 inch tires sink some in this stuff. Today looks to be a slugfest.
So, we climb slowly for about 4 miles, eventually drop a decent mile long descent into a dry valley, and then start another 11 mile climb to reach Alkali Road. As the miles pass, the road seems to get softer and the gradient steeper. And it's definitely getting hotter. With little vegetation taller than a couple of feet, the views expand to the horizon in all directions. 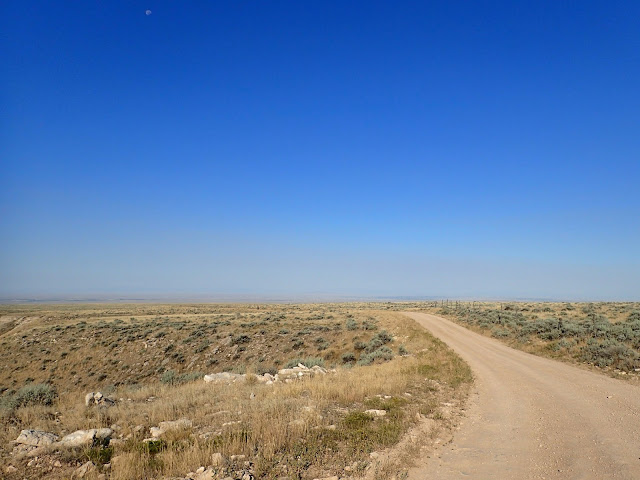 That's Paul in the distance, closing the gap from my earlier start.
Along the road, I notice what appears to be a metal culvert, extending vertically a few feet from the ground. It has a lid with a handle, but nothing else on it or around it. Every so often, I see another one along the road. Eventually, when we re-connect, I ask Paul what those are. In a classic get-er-done response, Paul says, "Let's find out." He easily pulls off the lid to uncover a section of pipeline, with a valve and a large hose. It sure looks like above ground access to a water pipeline. Curiosity satisfied for the moment, we ride on.
As Paul churns along on the dusty climb, he approaches a slow moving truck, the first vehicle of any kind we've seen all morning. I wonder what they're doing out here. Just then, a single engine airplane pops over a ridge and passes directly over Paul and the truck at maybe 100 feet above the ground. How's that for a bike/truck/plane traffic jam on a Sunday morning on a desolate back road? We speculate that they are monitoring the pipeline, as they soon leave us in the dust. 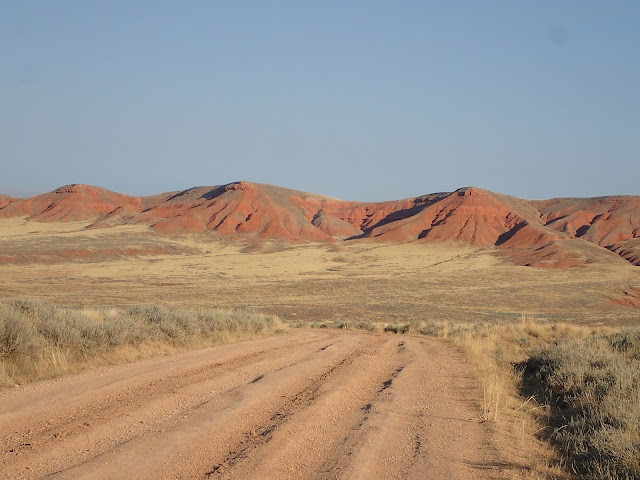 Another day in the sagebrush prairie.
We climb on. This morning is now downright hot. For better and worse, there is no breeze. Of course, there's still no water and no shade. And the roads seem to keep getting softer and steeper. The 16 miles to Alkali Road are becoming a workout, not merely a warmup.
As we steadily climb, the views expand to the west. This country is arid, wide open, sagebrush covered foothills with exposed sedimentary layers, straight from a John Ford western. It might be easier to enjoy if we weren't pedaling uphill on soft dirt in the heat for hours. So, I stop often to soak it in. Well, that, and I am tiring. 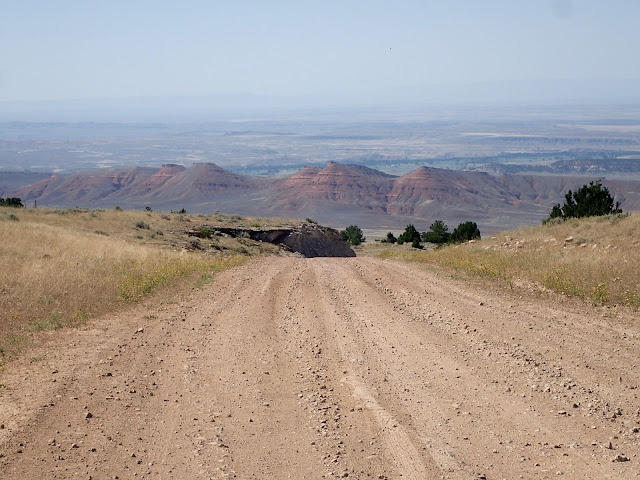 Stopping to look back to admire the view, although the shy road drops out of sight.
We finally hit Alkali Road. I feel good, but certainly feel the effects of the heat and effort of the 3,000 foot elevation gain so far. To continue on the Cloud Peak 500 route, I essentially need to gain another 3,000 feet over slightly more miles. I can ride that today, but wonder at what time and condition I would arrive at the Archaeological Site. We stop for a moment.
After some calculations of time and assessment of conditions, I decide to ride the National Back Country Byway straight south to Hyattville. So, I turn off route to descend more directly to the Archaeological Site. Determined to stick to the Cloud Peak 500 route, Paul turns north on Alkali Road to continue the climb. 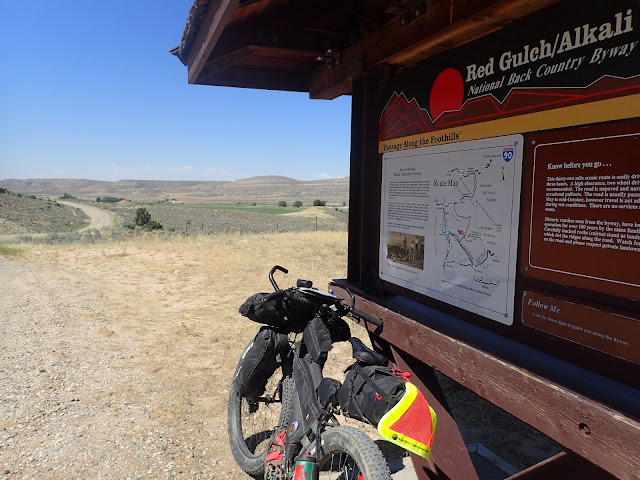 Rolling downhill directly toward Hyattsville on Alkali Road.
Alkali Road south toward Hyattville is no better road than Red Gulch Road, although it must attract more traffic as the dirt is generally harder packed. It's still rutted, gullied and often loose, especially on the corners and steeper sections. On the other hand, it's almost all downhill for 10 miles, then rolls gently thereafter.
Mid-day in early August is hot out here, even at the 7,000 foot elevation where I turned onto Alkali Road. But the miles pass quickly when coasting downhill and soon I reach the final 6 miles of asphalt to the Archaeological Site at 4,500 feet. Now, the heat drives me to seek some relief. 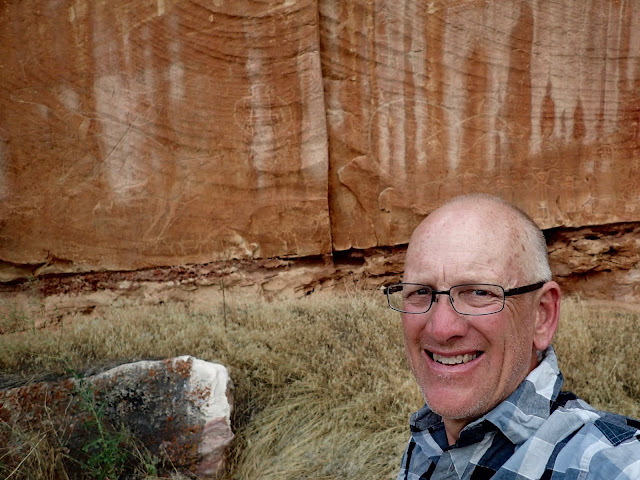 Inspired by the artistry of prehistoric carvers and painters.
The shaded campground is delightful. And full. No matter. This is our meeting place and Paul is several hours out. I'll stay here to wait for him.
I bee-line to the petroglyphs and pictographs. Cool. After spending some time walking along the base of the cliff face, I find some literature identifying and explaining individual figures. It is amazing to me. Prehistoric people surviving as hunters/gatherers in this harsh environment take the time to express their lives with carvings and paintings on stone. And some of those expressions survive thousands of years to this day. I sit in the shade and imagine life in such a culture and time. 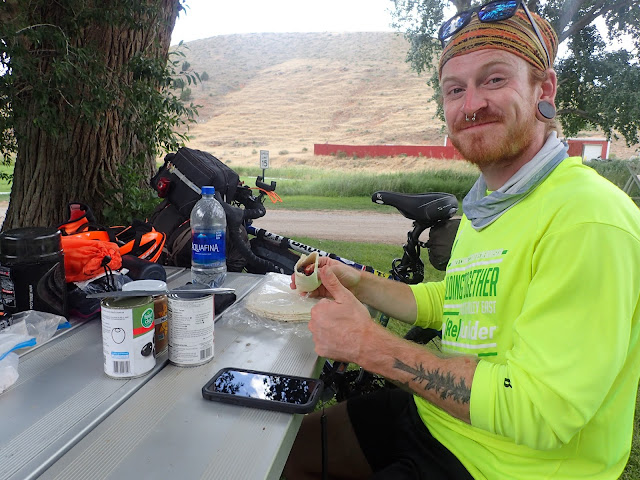 Sharing dinner with Rowan Mitchell, a fellow bicycle traveler on his own journey.
Still early in the afternoon, I scout out the campground, check in with the ranger, wash off some desert dust, cool off, eat, drink and even take a long nap. With no reservation, no sites available, and no latitude from the desk clerk, I formulate several plans for camping tonight. The best option is to wait for the Site Manager to return after 5 pm and try to work something out. By then, Paul also should be here.
As I'm moseying around, another cyclist rolls in. It's a young man named Rowan Mitchell several weeks into his solo ride from Omaha, Nebraska to Seattle, Washington. He's an engaging, friendly, intrepid guy heading out to start a new job. After a nice introduction, we separate to search for possible camping options and agree to re-connect later over dinner. 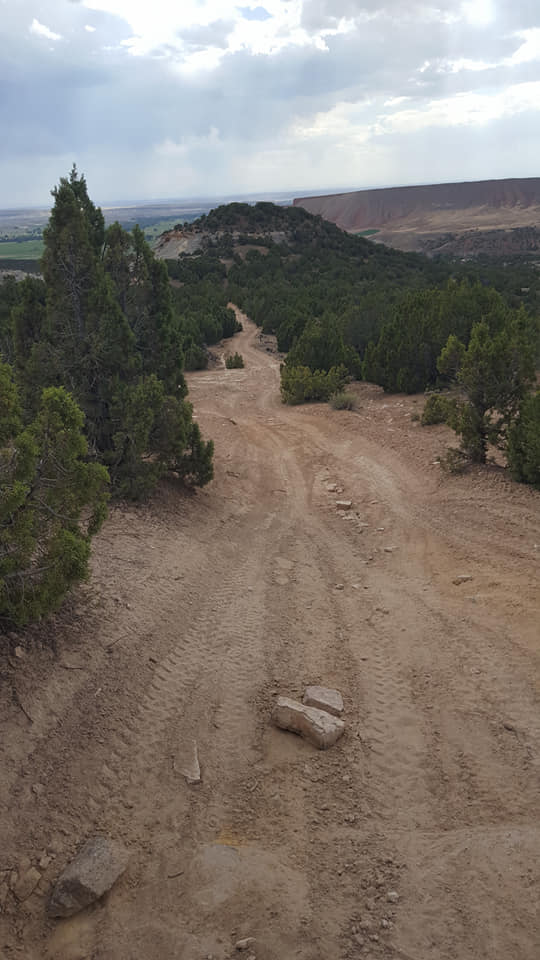 Today's long awaited downhill, which Paul calls the best downhill of the entire Cloud Peak 500.
(photo by Paul Brasby)
A tired but happy Paul rolls into the Archaeological site a little after 5:30 pm, more than ready to relax. I explain the situation, but don't have a solution yet. So, we re-connect with Rowan and share some time over dinner.
While ambling about, Paul happens across Denise, the Site Manager, who had just returned to the site from other duties. What to do with a full campground and 3 cyclists with not many options for the night? Without hesitation, she says we'll work something out and asks for a few minutes to "take a lap" around. In a few minutes, she's back with an offer of some space at a far end away from the developed sites. She'll even bring over a picnic table. Sweet. 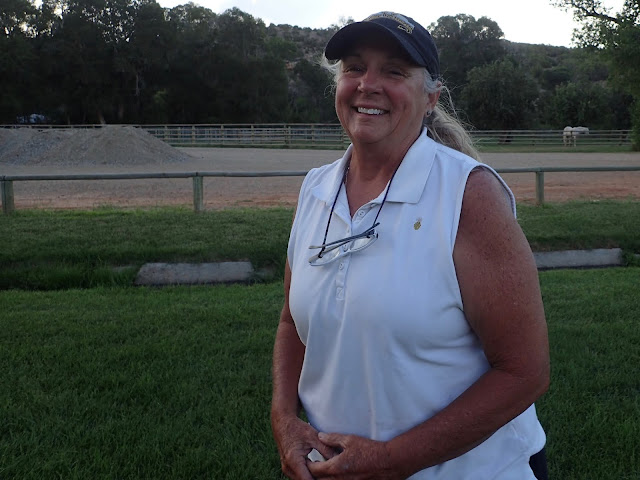 Our friendly host and problem-solver, Site Manager Denise at the Archaeological Site.
After setting up camp, we relax at our luxurious picnic table. Paul describes his ride after turning north on Alkali Road as a whole lot of the same hot, soft, rutted climbing as our first 16 miles on Red Gulch Road, at least for about 10 miles. Then it mellowed a bit as he reached cooler, higher elevations with some trees and a few short descents. Even so, the second 10 miles was still generally uphill before topping out at over 9,400 feet.
All that was worth it for the almost 15 mile descent, which Paul called the best downhill on the entire Cloud Peak 500 route. He added that the last half mile into the Archaeological Site dropped down the nastiest steep this side of Dude's Downhill. As Paul sets up his tent, Site Manager Denise delivers a picnic table to our spot.

At the end of the day, Paul rode his way and continued along the posted Cloud Peak 500 route. I rode my way and was able to spend ample time at the Archaeological Site. We met a new cycling friend who is living his life his way. We spent a relaxing evening around a picture perfect camp site along a creek at the base of a cliff. Finally, we met an awesome site host, who found a way to make our quiet evening possible.