In designing the route for the Black Hills BackBone, I set out to include my favorite back country roads, with memorable highlights, within the constraints of a generally North to South traverse of the Black Hills.

That can get complicated.  Spinning south of Deerfield Lake, the central Black Hills explode into a confuzzling labyrinth of gravel roads, dirt roads, abandoned roads, wanna B roads, skid trails, hiking trails, and paths.  Some are labeled, perhaps with numbers, letters or numbers and letters.  The roads may be county, state, a division of the state, like the Game, Fish and Parks, or one of smorgasbord of federal agencies.  Some aren't even roads.  They just look like one, until they don't.  I've been misplaced (not lost) on many of these roads.

Time to keep it simple.  Kind of.  Some things I just had to include.


So, here's the Black Hills BackBone route from Deerfield Lake to Custer, covering about 32 miles.

From Deerfield Lake, take Williams Draw Road (691) south for a splendid 8 mile up and occasional down romp through the pine trees.  This feels every bit as remote as it is.  Embrace it.

Williams Draw Road t-bones into Six Mile Draw Road (301) for a short half mile jog west to Ditch Creek Road (291).  Ditch Creek Road opens it up a bit for another 9 miles or so, but it's still a lot of uphill.  Today it was generally snow-packed, but not too icy.  For the BackBone, this should be a nice rhythm section.

Now, a money view.  From Ditch Creek Road, turn East (left) onto Custer Limestone Road (284), which soon reveals a ridge line view of seemingly the entire southern Black Hills.  Gazing straight east on a clear day reveals Crazy Horse Monument in the distance.  Today, a timely burst of sunshine, poking through an overcast sky, spot lit the carving like it was on Broadway.

It's a fun, fast descent down to the meadows below.  Check your speed enough to soak in the scenery.  Good thing there's a short incline 5 and 1/2 miles later, so you don't miss the next turn.  Go South (right) on Upper French Creek Road (286) for a rollicking 6 mile zip line to Custer.  There's progressively more development along this stretch, so keep an eye out for traffic on these narrow, twisty roads. 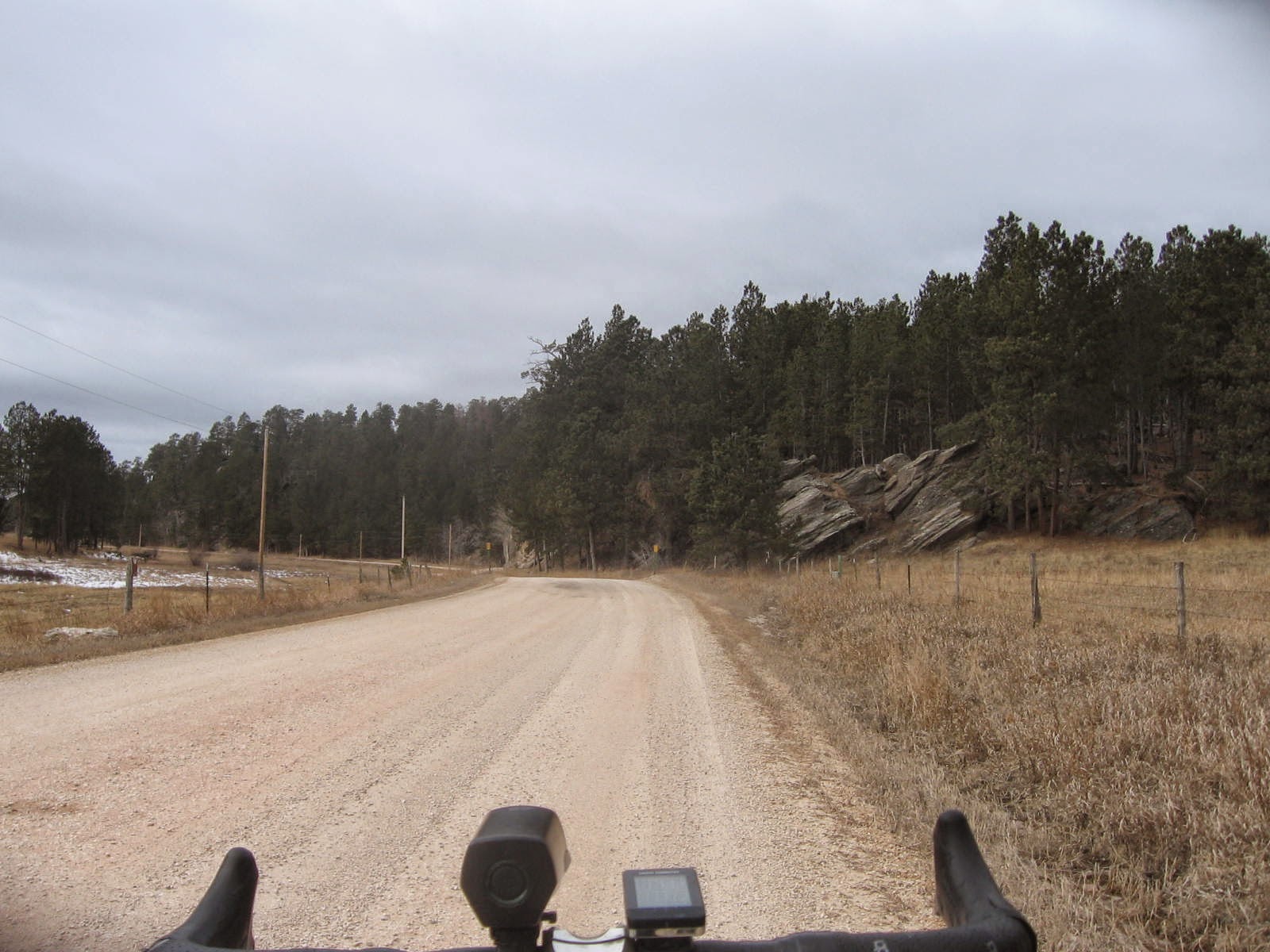 Upper French Creek Road eventually t-bones into U.S. Highway 16.  Turn East (left) on Highway 16 for about 2 miles into Custer, the first town since Spearfish, over 90 miles ago.  A nice place to rest is Harbach City Park, a block south of Highway 16 on 6th Street and an official trailhead for the Mickelson Trail.
Posted by CrossTrail at 7:51 PM