Prairie and Forest Gravel - Not your Grandpa Joe's Gravel

The Black Hills BackBone spans 320+ miles from NoWhere, North Dakota to NothingThere, Nebraska, along the spine of the Black Hills of South Dakota, on remote gravel and dirt roads.  Out here in the Northern Plains, you won't find a MidWestern farmland grid system of manicured gravel roads laid out like a celestial square mile checkerboard.  Rather, remote roads out here are very different and come in two distinct flavors:  prairie gravel and forest gravel.

The first 150 miles or so, and the last 60 miles or so, of the BackBone cover remote prairie gravel roads over wide open ranch land and protected National Grasslands having little human presence.  With a small, dispersed population and little development, the roads feature less thick gravel than one generally finds in farmland.  The tracks get packed hard and washboards are rare.  However, if you happen to hit a stretch with the graders out, it can be much worse.  Those counties must be on a triennial plan, so they lay it on thick.

The prairie gravel roads are relatively wide, with two, sometimes three, established vehicle tracks to follow.  Traffic, if any, is light, sight lines can be exceptionally long, and there are few wrong turns to take.  If somehow you get off course,  you may ride many miles without another intersection and the road may simply dead end.  If the South Dakota Department of Transportation map of all roads shows that a road stops or does not connect with another, believe it.  That's my experience.

Also, these prairie gravel roads are exceptionally exposed to the elements and the weather can change rapidly.  One must be prepared to deal with stout winds, scorching sun, fast moving thunderstorms, lightening, tornadoes, and hordes of locusts.  Watch the early afternoon skies, especially from the NorthWest.  That may be a dangerous storm, not your incredible strength, pushing you south at a pronghorn's pace.


Riding south out of Spearfish, the BackBone climbs into the Black Hills for 100 miles or so of forest gravel.  These narrow mountain roads are built primarily for logging trucks, with little gravel and no shoulders.  They are often just wide enough for two vehicle tracks, if that, so you'll really want to yield to vehicle traffic.  I often dismount off the road.  Fortunately, the logging trucks generally don't run on weekends.

With little gravel or maintenance and with logging truck traffic, the roads are fast when dry, a mess when wet, and prone to erode, often resulting in deep ruts and gullies, fallen rocks, downed trees and other debris.  Sight lines can be very short, as the road twists and turns, up and down, through the Hills.  If you're riding fast, ride light and attentive. 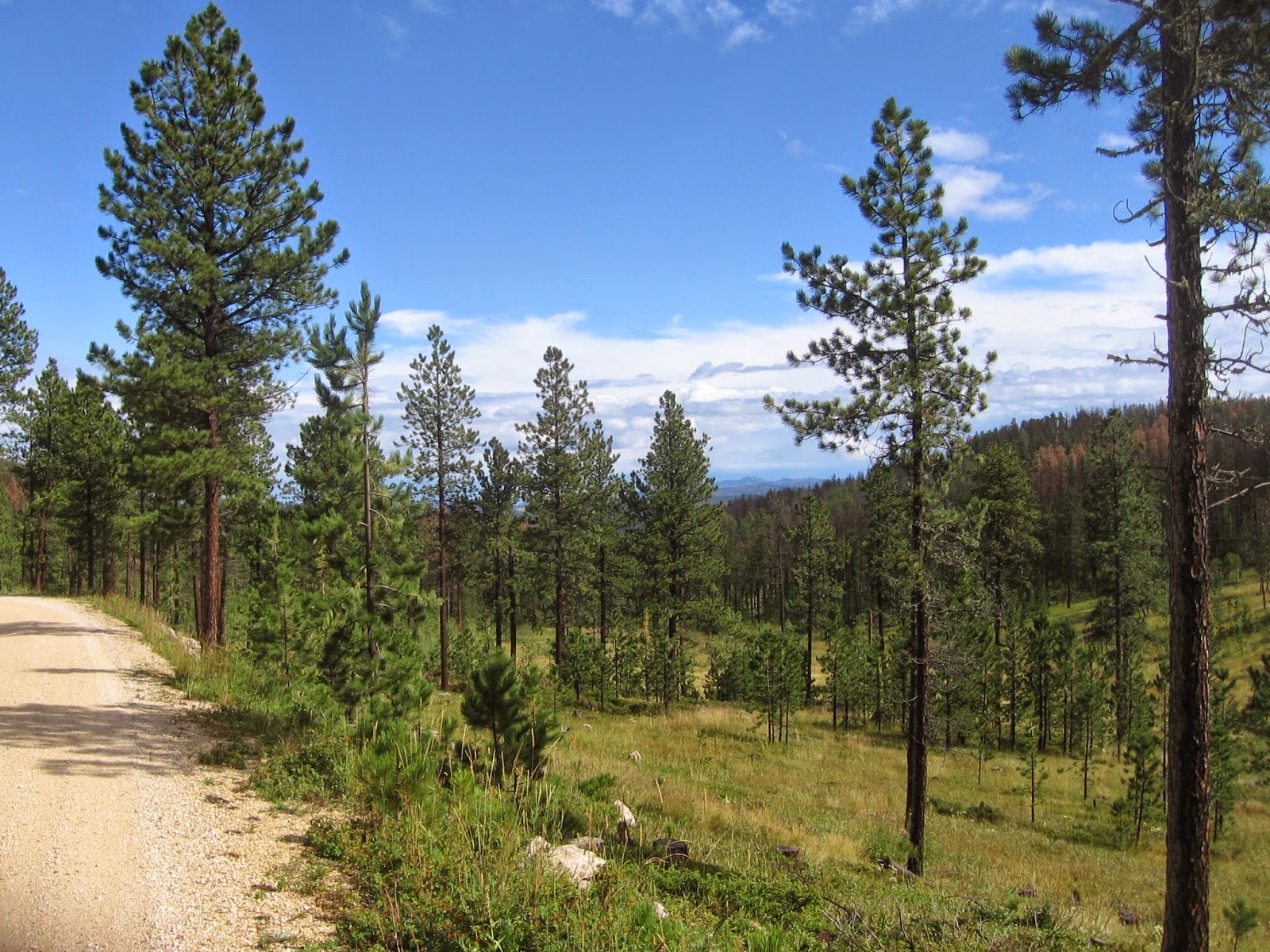 There are many, many gravel roads, dirt roads, skid trails, and other things that look like roads and trails.  Many dead end, eventually.  The BackBone follows roads marked with 3 digit Forest Service signs and County road signs.  If you're on a road with a 4 digit number, or with a letter in addition to the numbers, you are off course.  Go back.