Since dropping down Dude's Downhill on the afternoon of Day 3, we have been riding up, down and along the western flank of the Big Horn Mountains. Now nearing the southern end of that range, I will finish the final climb up from the west, drop down to the eastern flank, and ride north across prairie to the town of Kaycee. From arid mountainside to dry valley to overcooked prairie, this will be another day of wide open spaces. Not to worry. There will be no trees to block the big views. 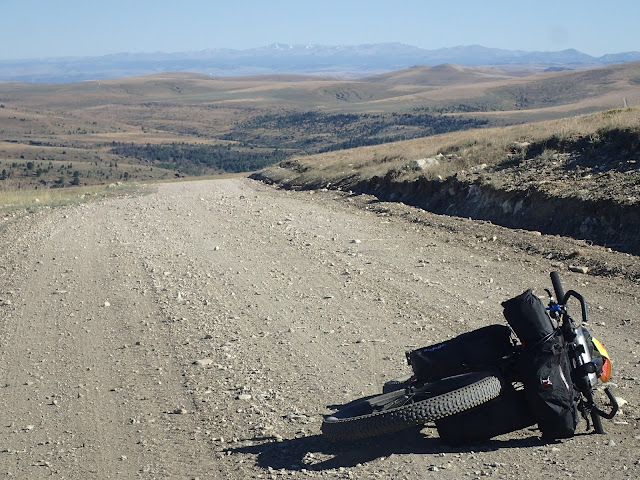 Looking back 4 miles to last night's campsite in the green oasis 1,000 feet below,
with the snow capped peaks of a few days ago thousands of feet above.
It's a quiet morning at my idyllic campsite along Rock Creek. I miss Paul's company and good natured banter, but know that he's well on his way to finishing his Cloud Peak 500. If all goes as planned, he'll ride into Buffalo tonight and I'll be in Kaycee. We should be able to communicate then.
Ideally situated halfway between Ten Sleep and Kaycee, this dispersed campsite and the nearby Middle Fork Powder River Campground lie nestled in a soothing green oasis. The burbling Rock Creek refreshes the body and softens the arid harshness of the surrounding mountainside. After a restful night, I savor a breakfast of oatmeal, jerky and coffee, realizing that this likely is my last camp cooked meal on this trip. 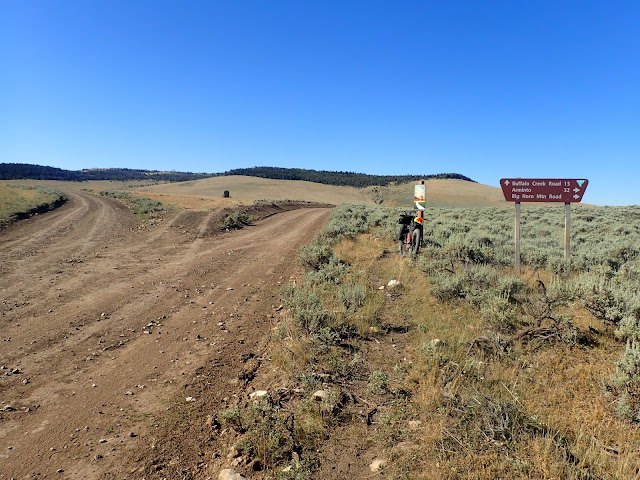 Veering left off Hazleton Road for a final uphill pitch to cross over to the eastern flank of the Big Horns.
I am relaxed and grateful for another day on the bike through this remote, rugged land. Like the 12 miles on this road late yesterday, Hazleton Road climbs steadily out of the river bottom on pretty solid dirt sporting a little gravel. Although it's a 6 mile long uphill grind right from the start, I know that today holds no longer, steeper climbs like those we've endured the prior 3 days.
I meander up this initial climb, even though it's early, relatively cool, and not all that hard. I think I knew that it was the tail end of the last long, big climb for me and, for that matter, the ride itself. I stop near the top, turn around, and take that picture at the top of this post. Then, I simply sit down, marvel at the landscape, and let my mind drift. This moment is good. This trip is good. 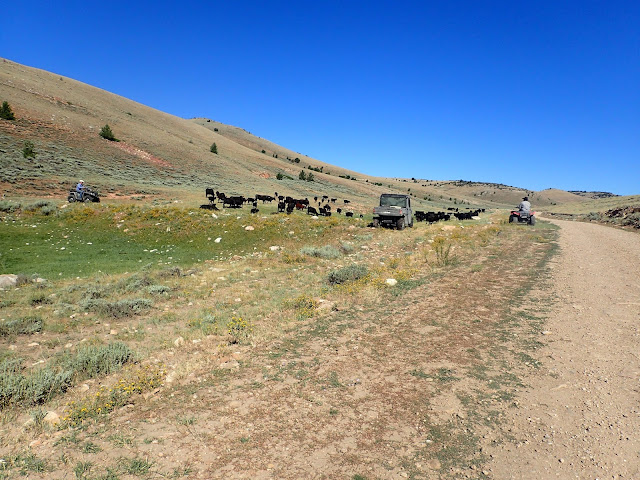 Looking back at a Wyoming cattle drive moving up Thirty Three Mile Road.
Back on the bike, I ease up that final pitch, roll over the crest and descend toward the dry valley far below. Like most of our climbs over the past several days, this descent is steep, rocky, loose, dry, and long, plummeting 2,200 feet in the next 10 miles. I regularly stop to relax body and mind, cool brakes and take in the view.
Lo and behold, ahead a herd of cattle lounge in and around a small pond created by a stock dam. I haven't seen cattle in many days in this arid country, and have not seen a stock pond with water in many more. As I slowly pass, cowboys on ATVs patiently watch the cattle drink and cool off before continuing their drive to higher pastures. The trail boss follows in a pickup, offers me water, and invites me to stop at their camp below. Such kindness and generosity is a lifestyle out here, and always appreciated. 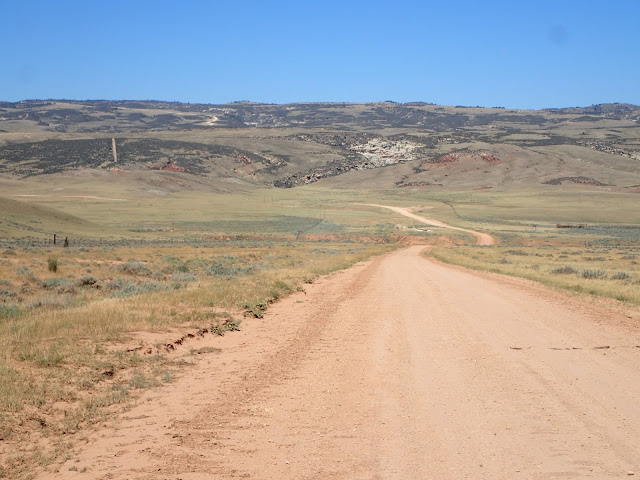 Dropping down the final stretch of Thirty Three Mile Road.
As the morning warms up, I'm glad to be bouncing down this mountain road rather than climbing up it. The dusty surface is consistently loose and occasionally littered with chunky rocks, while the gradient varies between steep and steeper. Other than a few small bumps along the way, it extends for almost 20 miles. That would be a brutal climb.
Once down into the dry valley, I turn onto W Willow Creek Road, which promptly loses all those rocks and turns to fast, hard packed dirt. Well, it's hard packed except for random pools of powder that grab my wheels and send me swerving. Those unnerving powder patches force me to focus on the road surface more than the scenery. So, I stop frequently, just to look around. 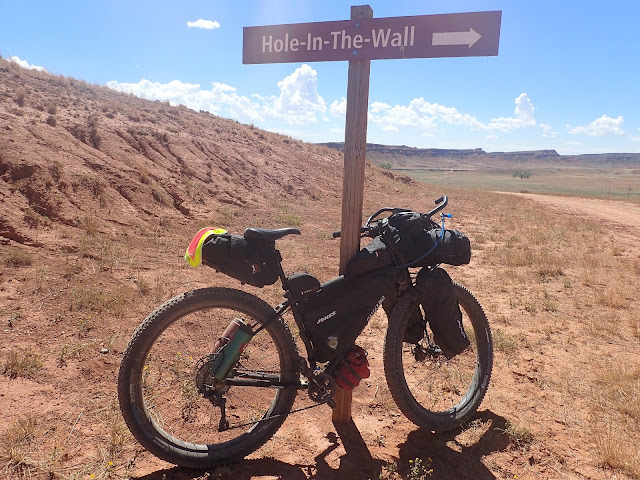 A wistful look toward a road not taken.
I steadily roll through this valley, which trends downhill with occasional, not insignificant pitches up. Now mid-morning, it's hot down here. While I blissfully descended, the sun conveniently pre-heated these lower elevations to remind me to be thankful that the remaining inclines are not long and are not steep. But there's no sign of water anywhere, so I moderate effort and monitor water consumption.
Cruising along this dusty road through this dry valley, I roll up to a simple wooden sign that says "Hole-In-The-Wall" and an arrow. That's the name of the hide-out of some infamous outlaws of the Old West, such as Kid Curry, Black Jack Ketchum, Jesse James, Harry Longabaugh (aka The Sundance Kid) and Butch Cassidy's Wild Bunch Gang. For a truly remote adventure, one could turn onto that road, even more primitive and less traveled than this one, ride about 8 miles to access a trail head, and hike up to enter the "Hole-In-The-Wall." I'd love to do just that, but today lack the time, energy and water. 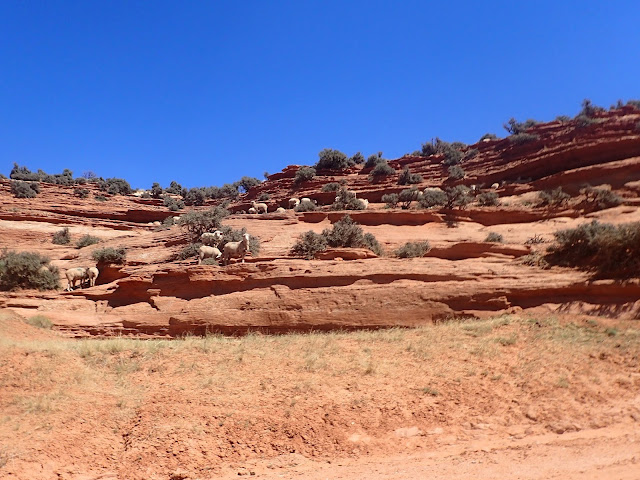 Domestic sheep, not desert bighorns, seek shade in the late morning heat.
To my surprise, I ride past an actual ranch on W Willow Creek Road. Not surprisingly, it's called The Willow Creek Ranch and it's the first development of any kind I've seen since yesterday morning. Shortly thereafter, I spot some critters scrambling for shade on a craggy rock face. Unfortunately, it's domestic sheep, not desert bighorns, looking for a break from the sun. Irritated by my presence, they bleat out of chorus of raucous baa's to shoo me away. I pedal on, but those slivers of shade are inviting.
Eventually, I turn onto Lone Bear Road, a more developed gravel road that appears to carry significantly more traffic. With the firmer surface and less lumpy terrain, the miles pass more quickly now, even with an increasingly persistent headwind. I actually ride past a sizable reservoir that supports green vegetation and birds. That's a rare sight around these parts.
Less than 20 miles out of Kaycee, the gravel thickens and actually is washboarded, indicating relatively more and higher speed traffic. The sun is really cooking and now that stiff headwind works to desiccate me. I'm ready for a long break, but this dry prairie extends to the horizon.
I look at everything but the never changing road in front on me. I try not to look at the cyclocomputer, as it seems to never change either. When I finally look straight ahead, I see something large smack dab in the middle of the road. Am I hallucinating? What is that? A few minutes later, I can just make out the shape of a large animal. What is it?
Now, I'm watching the road. Maybe that's a pronghorn. But why is a pronghorn laying down in the middle of the road? It must be roadkill. It's still a long way ahead. I keep pedaling. Now I can see the outline of a pronghorn with its neck and head looking toward me. Maybe it's hurt. I keep pedaling. It doesn't move. When I'm finally within about 100 feet, the pronghorn casually stands up and trots off into the prairie. Maybe this road is not that heavily traveled, after all. 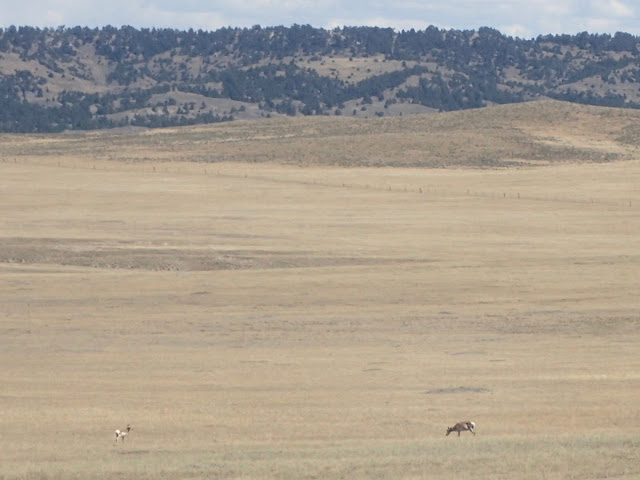 Not my pronghorn lounging on Lone Bear Road, but a mother and fawn in the nearby prairie.

This final hour or so into Kaycee isn't that hard, but I'm baked by the sun, blown by the headwinds, and weary from the effort of the day and the week. I turn onto paved Old Highway 87 and then pass under Interstate 25. Like yesterday, I find my first shade of any kind at about 2:30 pm. Even though Kaycee lies just a few miles away, I get off the bike and lay down awhile. I dump the last of my water over my head to cool off and close my eyes. In time, I soft pedal the home stretch into Kaycee.

Where The Streets Have No Name, U2 with Soweto Gospel Choir (2009)

Posted by CrossTrail at 5:08 AM