The Black Hills BackBone is simply a bicycle route that I created back in 2014.
There is no race, or public event, or "Grand Depart," or anything like that. It's just a route I created to ride myself. Then I created this blog to document my journey, in part as a digital scrapbook and in part to share my experience with others. That's it.
But, oh, what a route.
Inspired by the cross-country routes of the TransAmerican Trail and the Great Divide Mountain Bike Route of the Adventure Cycling Association, and by the cross-state races of the original TransIowa, Gut Check 212, and similar races, I wondered whether I could create a remote road route on primarily gravel and dirt roads that spanned the height of the State of South Dakota along the spine of the Black Hills. That whimsical daydream led to many hours of scouring maps, scouting back roads, and pedaling all over Western South Dakota. There seemed to be no end of options.
I struggled with this route, primarily because the Black Hills National Forest offers a staggering number of amazing roads to ride. Scouting a promising road invariably leads to more. At some point, I simply had to stop, prioritize, and choose. The Black Hills BackBone is the result. Here's the cue sheets, from the route first published in January 2015 and updated in 2017. Black Hills BackBone Cue Sheets. Here's a link to a RideWithGPS file that I created in 2021 from those cue sheets. Black Hills BackBone - 2021 Digital Map. And here's a Page with links to posts, photos and maps. Black Hills BackBone Page.
Conceived as a continuous, self-supported, solo ride, the Black Hills BackBone readily lends itself to a multi-day bikepacking trip or even a multi-day supported tour. In 2017, a small group of friends rode the entire route over three days in the heat and wind of a Fourth of July weekend. For my multi-post report on that ride go to An Idea Takes Shape; Gathering; Crossing The Northern Prairie; Up And Into The Black Hills; Focus On The Finish; A Weekend To Remember; Friends.
Over the years, many cyclists have asked about the BackBone and I know of several other attempts. For example, on a cold, rainy Memorial Day weekend in 2019, an intrepid group of eight cycling enthusiasts from Colorado made a run at it. On that particular weekend of difficult conditions, they rode about as much of the route as one reasonably could. They said they had a great time, particularly their Day 3 from O'Neil Pass to Custer, and have returned to ride Black Hills back roads every year since. New Friends On The BackBone.
The Black Hills BackBone is one memorable ride across the State of South Dakota.
But wait, there's more.
Say you've ridden the Black Hills BackBone all the way to the STOP sign finish at the Nebraska border. A celebration is certainly in order, along with the photo or two. But then imagine turning pedals westerly on Dakota Line Road to access the Wild, Wild Western reaches of the Black Hills. Back there, a serpentine network of barely used gravel and dirt roads await for you to wind generally north for a return trip back to the North Dakota border.
Now, that's one big, bad loop. 330 miles to add to the BackBone, making over 640 miles, all told.
It's the Black Hills DoubleBackBone. DoubleBackBone Digital. DoubleBackBone Cue Sheets.
Sometimes, more is more. More rolling prairie patrolled by herds of cattle, buffalo, pronghorn, and elk. More obscure canyons scoured by flash floods. More twisty ridge lines climbing to soaring views. More hills stuffed with pine and aspen. More dirt near-roads connecting with Secondary Forest Service gravel. And even more remote than the easterly side of the loop, which is a bit hard to believe until you're out there.
The Black Hills DoubleBackBone, like the original BackBone, is just a route that I think is fun and challenging, however one chooses to experience it. Solo or group. One continuous ride, a series of days, or in sections over time. Self-supported, shuttled, or fully supported. Maybe some combination or even all of the above.
The Black Hills BackBone. Go big.
The Black Hills DoubleBackBone. Go bigger.
The Black Hills. Just go. 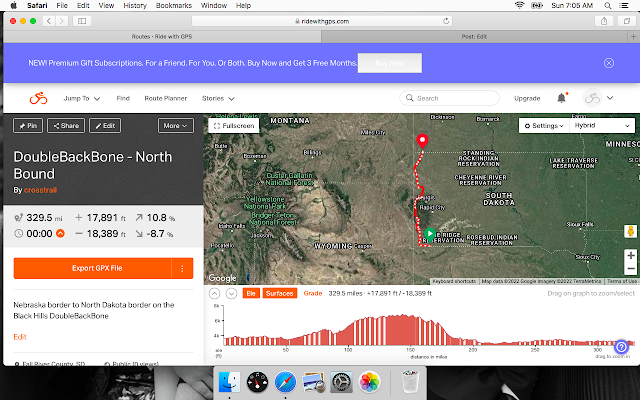 Posted by CrossTrail at 5:33 AM